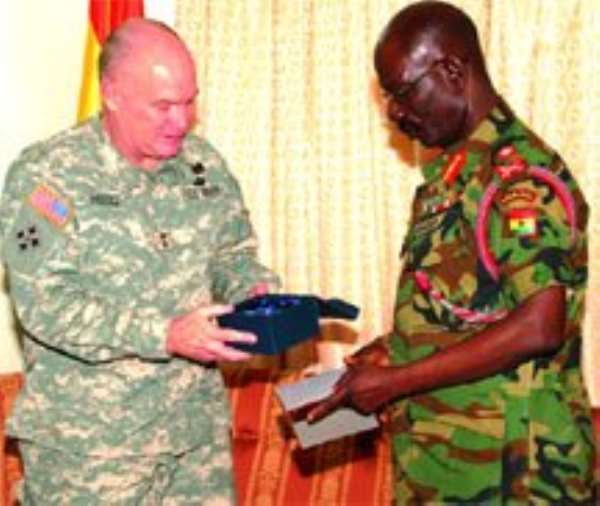 The Chief of the Defence Staff, Lt Gen Augustine Peter Blay, has emphasised the position that the Ghana Armed Forces (GAF) would not commit troops to Cote d’Ivoire should the Economic Community of West African States (ECOWAS) go ahead with its decision to use military force to settle the political impasse there.

Responding to a question from the Commander of the United States Army in charge of Africa, Major-General David Hagg, Lt Gen Blay said the GAF were overstretched because of their international engagements in peacekeeping operations in various trouble spots in the world and that the top brass had made that known to the Commander-in-Chief of the GAF, President John Evans Atta Mills.

He said the GAF also had their commitments to protect the territorial integrity of the country.

Among the trouble spots where the GAF are carrying out their peacekeeping operations are Lebanon, The Sudan, DR Congo, Somalia and Cote d’Ivoire.

Major-General Hagg was in the country to officially find out whether or not Ghana would commit troops to Cote d’Ivoire, should the need arise.

At a recent meeting with editors in Accra, President Mills declared that given the commitment of Ghana to peacekeeping operations in other parts of the world, as well as the country’s own safety and security, it was important to keep a sizeable number of troops to maintain internal security.

Answering questions from journalists at the forum, which was intended to mark his second year in office, President Mills said Ghana would be unable to contribute troops to ECOWAS for deployment if the option of military intervention was employed, since its troops were overstretched by a number of overseas assignments.

Lt Gen Blay said President Mills, who is also the Commander-in-Chief of the GAF, arrived at that decision after studying reports submitted to him on a daily basis by a team of Ghana's Army Command in Cote d'Ivoire.

Later in an interaction with the Daily Graphic, Lt Gen Blay said he had just returned from the ECOWAS Chiefs of the Defence Staff meeting in Abuja, where Ghana’s position on the decision by ECOWAS to commit troops to Cote d’Ivoire was made known.

Asked whether Ghana’s position would not compel the sub-regional grouping to sideline it in any decision-making in respect of military action in Cote d’Ivoire, Lt Gen Blay responded in the negative and added that that was not how they worked as ECOWAS Military chiefs.

Major-Gen Hagg commended Ghana for its role in ensuring that peace returned to Cote d’Ivoire and urged the leadership to continue with the good work.

He gave the assurance that the United States Army would continue to partner the GAF in building a robust and modern Army to continue with its good work.

He stressed the need for relations between the US and Ghana to be further strengthened.

Major-General Hagg later called on the Chief of Army Staff, Major-General Adinkra. Share Your Thoughts on this article Name Email Location Comments Graphic Ghana may edit your comments and not all comments will be published