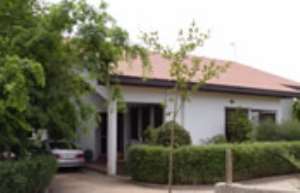 The NDC has a vision for strong, safe and stable communities in the country. It is that wherever we live and wherever we are, we can have access to the things that make our lives fulfilling, including decent housing and a sense of belonging to the community in which we live.

Having regard to the above statement, the NDC Manifesto pledged to facilitate access to decent housing by the ordinary Ghanaians, strenuous and sustained efforts were to be made to mitigate the housing deficit. The NDC government between 1996 -2000 built the following housing complexes;

• The Sakumono Estate Complex
• The Team Community 3 Estates
• The Adenta estates
• The SSNIT Estates constructed in all Regions
The government of President John Evans Atta Mills, under the Better Ghana Agenda 2008 programme has committed itself to the largest low cost and rental house building programme since 2000. It will focus on five critical areas:

• National Human Settlement policy and Strategy
• Housing Shelter Strategy
• Urban Development
• Slum Upgrading and Prevention, and
• Rural Housing
With this new innovative policy in mind, the NDC government believes social housing is very important in any economy as it provides security to families, societies and communities. Ghanaians would agree with me that this new policy commitment would require the concerted effort and commitment of all our built environment professionals to overcome this developmental challenge.

The Housing legacy NDC inherited in 2009
When the NDC government led by President Mills came to power, in January 2009, there was clear evidence that the country's housing sector had suffered from 8 years of under- investment under the NPP Administration.

In parts of the country, the housing needs of the urban inhabitants are often restricted to sub-standard structures, unsanitary environments and squatter and slum communities. Today, available data suggests that the housing deficit is in excess of 800,000 units. Housing supply growth varies between 25,000 and 40,000 units per year against annual requirements of 100,000 units. The inability of the housing delivery system to meet the growing effective demand over the 8 years of NPP government has created strains in the existing housing stock and infrastructure, especially in the urban areas.

The NPP policy of creating a property owning democracy left many people on their own, widening the gap between the rich and the poor. Because of this and because quality and security of private rented accommodation is not always of a high standard, social housing has become very necessary. The result of this NPP hands off dogma put the dream of many people owning their own home beyond their reach. Whilst the NPP spent billions of tax payers' money on the comfort of housing for the few in government, the promises of basic amenities to the ordinary person were practically ignored.

Instead of providing housing shelter for the people of Ghana, the story was that during the Ghana at 50th anniversary, the NPP government spent millions of dollars within a short time to construct many executive mansions for foreign dignitaries.

At a time, the NPP had promised cocoa farmers their own housing scheme. After several years of NPP government, only 1 house unit was constructed by the time they left office.

The government of President Mills has within the last 15 months completed the construction of 19 units of 3 bedroom self-contained houses for cocoa farmers in the Brong Ahafo Region, Ashanti and Central Region, using locally manufactured building materials

Unlike the NPP, the NDC government will not underestimate the scale of the housing problem in the country or the role of the government in helping to build a strong and vibrant housing sector.

Meeting today's housing challenges
In the relatively short period of the National Democratic Congress's assumption of power, NDC government has focused its housing strategy on Urban Development; Slum Upgrading and Prevention; and Rural Housing. The government also recognises that the market alone cannot provide the public housing and infrastructure needed and therefore is working in partnership with private enterprises for the construction of affordable housing units across the country.

The New Housing Strategy
The President in his recent State of the Nation Address spelt out the NDC government's vision and policy direction with regards to a new housing strategy for the country.

The president was alarmed at the spectacle of the increasing number of homeless people and street children in our urban areas, which he said was not acceptable and could not be tolerated. He therefore, directed that from the beginning this year, in addition to whatever the Central Government was doing in the Housing sector, that the Metropolitan, Municipal and District Assemblies to invest a sizeable proportion of their District Assemblies Common Fund in rental housing for lower income groups.

A National District Assemblies Rental Housing Project Task Force would be established to oversee the project and make sure that this problem was given the highest priority.

The Engineer Corps of the Ghana Army will once again play an integral role in Government's rural infrastructure expansion programme. To this end, government will be re-equipping and resourcing the Engineer Corps to enable the establishment of an additional Regiment in the Northern sector.

Investing in affordable Housing
Government has directed the Ministry of Water Resources, Works and Housing to complete all the 5140 affordable low cost house units which were left uncompleted by the previous government at Borteyman, Numgua, Kpone, Tema, Asokore-Manpong, Kumasi, Wamale, Tamale, Koforidua and Wa.

These projects were financed mainly from HIPC sources, which steadily declined from GH¢30 million loan granted by SSNIT. To date, an amount of about GH¢ 70 million has been expended on the projects. They are now almost at a Standstill due to budgetary constraints. In view of the above, an urgent application has been made to the Ministry of Finance and Economic Planning for an amount of GH¢ 100 million to complete the above mentioned housing units. It is expected that these will be completed and sold to enable the Ministry to extend the programme to the other Regions.

Government has started the construction of the third phase of the affordable housing at Ho, Sekondi /Takoradi, Sunyani, Cape Coast and Bolgatanga

Construction of 10,000 safe, decent and low income affordable housing units on 74 acres of land at Nsakina, Amasaman, in the Ga East District was released to Messrs Agu Resource.

Ghana-Korea Housing Project
Government recently singed a Memorandum of Understanding with South Korean for the construction of 200,300 units of affordable housings to reduce the crippling national housing deficit.

The principal objective of the project is to provide an appropriate framework for developing better housing for the security agencies under an off-taker arrangement through a Public Private Partnership business format and also as vehicle for the realization of the better housing programme. The off-taker arrangement means government has guaranteed to buy a certain percentage of the units when completed from the project contractors.

The project is intended to roll out two streams of housing developments totalling 200,300 houses. The first stream of 200,000 houses will be built across the country with a 45% guaranteed off-take by the Government for the securities agencies, whilst the remaining 55% is sold to the Private Sector. The second stream involves the building of 300 units in Accra/Tema for State Protocol as accommodation for visiting VVIPs

Benefits
This Housing project will provide accommodation for over 200,000 families and will also generate varied employment of more than two million jobs over the project cycle. The project will have a multiplier effect on the economy and contribute to socio-economic stability.

The project implementation period will be 5 years commencing on the effective date of the Off-taker Agreement, which is estimated to be April, 2010. The Project will be executed on a yearly basis to build a minimum of 40,000 units per year.

OTHER HOUSING INVESTMENTS
The Ministry has signed MOU with Messrs WALLTECH Ghana Limited for the construction of One Hundred Thousand (100,000) safe, decent and low-income affordable housing units. The first phase will deliver 40,000 units and 30,000 each being delivered in the second and third phases using the WALLTECH technology.

Messrs WALLTECH will secure its own funding for the construction of the housing units for sale to Public and Civil Servants including the Military, Police, Prisons, CEPS, and Immigration etc. The Ministry has allocated a plot at Cantonments for the construction of a prototype using the steel mesh WALLTECH technology. This is to enable the public assess the technology before proceeding further.

KAMPAC Properties Ltd.
The Ministry has also signed an MOU with KAMPAC Properties Ltd for the delivery of 10,000 housing units. A prototype was erected by the Company during the 2nd week of April 2010. The erection of this sample house type is expected not to take more than ten (10) days On-going Affordable Housing Programme

Using local building materials
The Ministry as part of its mandate to promote the production and usage of local building materials will organize a National Housing Conference between 7-9th October 2010 with the Building and Road Research Institute (BRRI). The Council for Scientific and Industrial Research would act as the facilitators of the conference. The Ministry will facilitate the sale of compressed earth blocks for rural housing through the District Assemblies. And it is expected that the public sector housing and other buildings such as schools, clinics would use at least 60% of local materials.

Hydra Form brick making
The Ministry is also facilitating the acquisition of four (4) HydraForm brick making machines to assist in the production of bricks with 5% cement content.

These will initially be given to the housing delivery Agencies, such as State Housing Company (SHC), Tema Development Corporation (TDC), and the Department of Rural Housing. The use of locally manufactured building materials in the construction industry is of utmost importance and plays a pertinent role in the social and economic development of the country in terms of job creation. Fortunately, these raw materials are available and found in abundance in the country and extensive research has been conducted on their strength and durability for usage. These materials are stabilized soil bricks/blocks, lime, pozzolana-cement and bamboo.

As new homes are built the government would be assessing how these social housing are allocated, to ensure fairness for local people. If someone has lived in an area for the whole of their life, they should have a chance to live there when they start their own family- near friends and family and with access to their local community networks.

The government will ensure that local MDAs and Districts Assemblies give priority to local people in the allocation of social housing. This is fair and it will support the mainstream majority on modest income up and down the country.

As the NDC government builds the communities of the future, it would be building on the success story of regenerating our urban centres.