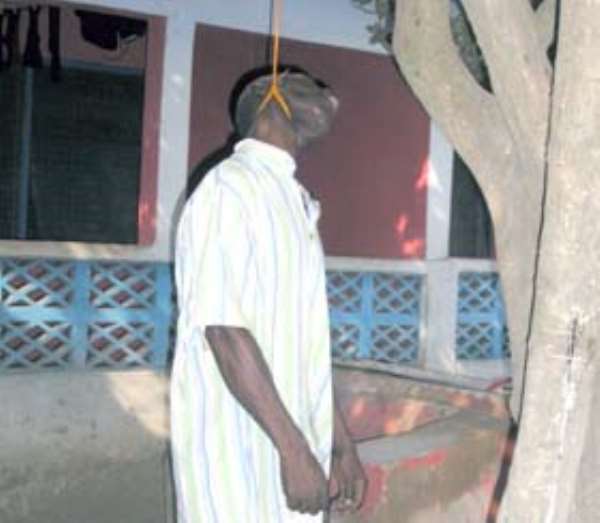 Tragedy has struck another marital home at Sowutuom, a suburb of Accra, barely a week after Georgina Pipson murdered her five children and poisoned herself in bizarre circumstances.

Edward Kwadwo Marfo, an unemployed 60-year-old man who callously murdered his 25-year-old wife, Florence Ama Prah, committed suicide by hanging himself from an orange tree in the early hours of yesterday at their home.

Incidentally, this latest tragedy took place at Santa Maria- Sowutuom axis of the city where recent calamities had occurred including two suicides.

A co-tenant in the house found Marfo hanging around 3:00am.

Kwadwo Marfo was alleged to have stabbed his wife several times with a kitchen knife on Monday January 11, 2010 and subsequently spent about two nights with Ama's mutilated body in his room before finally deciding to end his life too.

It was believed he lighted several packets of mosquito coil to ward off flies and neutralize the emanating scent from the decomposing body after his murderous act.

Ama's body was found lying in a sofa, covered with a piece of cloth. It had a deep cut in the abdomen, making her intestines gush out with several cuts on her face and armpit.

There were also blood stains on the refrigerator and on the floor in the living room where she lay. A kitchen knife and a metallic club were also found at the scene.

A police source said Marfo might have clubbed his wife several times after stabbing her to death.

Marfo, who worked as a KIA truck driver ferrying pure water from Tema to Accra until he lost his job a month ago, had two children- Korantenmaa, 5, and Nana Owusu, one and half years- with his young wife.

Before he hanged himself yesterday, he took the children to his in-laws and told them he could not find his wife and that he suspected she had abandoned her matrimonial home.

The in-laws even visited the home where Marfo received them on the front porch of the rented apartment, not knowing that their daughter lay murdered in the room.

According to the landlord, Ransford Addy, the couple seemed madly in love.

“They would bathe together, and the man usually did the laundry,” Addy disclosed.

He said Kwadwo, who had been his tenant for the past 10 months, was very unassuming and did almost everything together with his wife.

He could therefore not fathom what could have incited him to kill his wife.

However Kwadwo Prah, 46, the father of Ama, told DAILY GUIDE the couple had problems lately, of which the last one was on Sunday night; but they (in-laws) managed to resolve the misunderstanding.

Kwadwo Prah, who trades in photo frames, said Marfo was domiciled abroad, but during his last visit home about six years ago, he could not return to his base until his visa expired.

He later got engaged to his late daughter, who was the eldest of six children and had two children with her.

He noted that Marfo declined to allow his daughter to work based on suspicions of extra marital affairs.

Mr. Prah said he has had several reports from his in-law that his daughter had been sleeping out.

On several occasions, they had tried to resolve quarrels over Ama's alleged flirtatious behaviour but no sooner had they settled one than another complaint came up.

The children had since Monday afternoon been in his custody without any sign of their mother. Since she had recently sold all her mobile phones, it was impossible to reach her.

According to Ama's father, he, together with his wife, visited their in-law on Tuesday evening, where Marfo received them on his porch, complaining about the absence of his wife.

Mr. Prah said not even the two hours of their stay gave them the slightest indication that their daughter was lying dead in the hall.

Recently, according to Mr. Prah, Ama had to cause an abortion because Marfo said the second child was too young.

The landlord also said he was worried when Ama was not showing up because Marfo had complained to him that he was not feeling well. He wondered why Ama should leave to her parents' house while her husband was sick.

A team of high-powered policemen, drawn from the Regional Police Command, Kaneshie Division, Odorkor District and the National Headquarters, were at the scene.

The bodies of the deceased have been deposited at the Police Hospital morgue for autopsy.