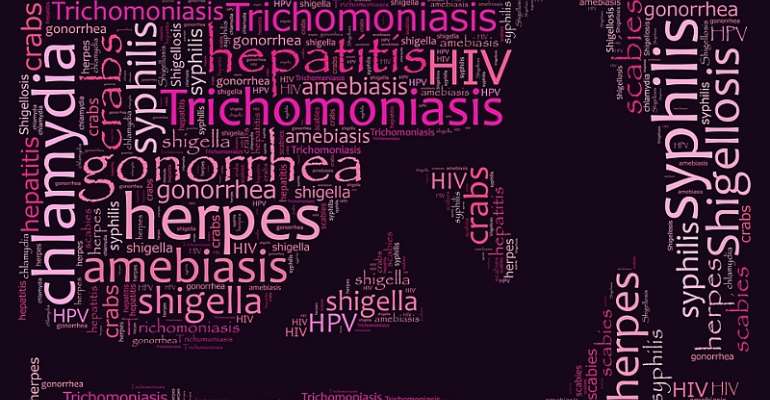 Nevertheless, these venereal or sexually transmitted diseases manifest in the body of human being through various symptoms. They are: Sleeplessness, heavy and traumatic waist pains, loss of weight, leaking of urine out of the penis, lack of vigour and vitality (loss of strength), hotness and movement in the body, wormlike movements and rumbling in the stomach, heart-ache (pain in the chest), Hydrocele (small swelling i.e round outgrowth containing watery fluid in the scrotum ), movement in the testis, cough, discomfort in stooling i.e constipation, headache, catarrh, painful stomach (lower abdomen), ulcer, discomfort in stooling as if suffering from acute pile, off and on boils, itching and scratching in the anus, emaciation (make thin and weak), hotness of the legs, palms, and feet, lost of memory, shortage of blood, feeling of sand in the eyes, long and narrow penis, shrinking penis, slight shaking of different part of the skin at interval and at random (movement and vibration all over the body ), slight delay before urination, eye pains, conjunctivitis (apollo), trachoma (chronic eye disease), blindness, mental problem (madness), burning sensation, serious, sweet and uncontrollable itching and scratching in the private part, tiredness, sweating profusely, quick release of sperm (premature ejaculation), weakness of penis, eye shaking or irritation, watery sperm, low sperm count, dead sperm, cut in the private part, swollen penis, Arthritis (joint pains), skin rashes and sores, yellowish, milky or colourless discharge from the penis, blood discharge, involuntary emission (unconscious discharge of semen or other fluid from the body ), flat tummy, decline in sexual libido i.e. fall or lack of sexual desire, inability to go more than one round, persistent (erectile dysfunction) abnormal erection of the penis (priapism), impotence (completely lacking in sexual power), prickly heat even in cold weather, internal body heat, pinching and biting all over the body, red spots in the private part, razor-like movement in the eyes, continuous sore mouth or oral thrush because of oral infection, continuous sore (hurting and painful when touched or used) tongue because of oral infection, mouth odour because of oral (mouth) infection, Watery and excess vaginal secretion, hotness of the womb, ceasing of menstrual period without pregnancy( amenorrhea),painful menstruation (dysmenorria), scanty and irregular menstruation, dark and watery menstruation, two days (or less) menstruation, six days (or more ) menstruation, yellowish, milky or colourless discharge from the vagina, lack of ovulation (release of egg from the ovary), fibroid and tumour, leaking of the womb, shrinking or reduced breast, breast pain (especially at the nipple),lack of sexual libido i.e. fall or lack of sexual desire (frigidity) atimes because of erectile dysfunction (weak erection) of the clitoris, serious, sweet, and uncontrollable itching and scratching in the external genitals (vulva), cut and sores in the private part (vulva), dry vagina,blocked fallopian tube (salpingitis), miscarriage of pregnancies, giving birth to a premature baby, giving birth to a stillborn baby (dead new born baby), giving birth to a baby that dies hours, days or weeks after birth, spotting between menstrual period (metrorrhagia),heavy menstruation i.e. excessive bleeding during the menstrual period (menorrhagia), bad odour from the vaginal ,wet nipple, sore (hurting and painful when touched or used) vagina or vaginal thrush, tongue-like outgrowth from one part of the vulva ( outer part of the vagina i.e. the one you see physically), swollen batholin gland, red spots in the private part, crack in the clitoris, protuberant (curving or swelling outwards) vulva (face of female private part). Some of these happen because the sexually transmitted micro-organisms always target the sexual reproductive organ i.e. testis (in male) and ovary (in female). They attack these organs weakening their activities and at extreme circumstance render them unproductive. Sexually transmitted micro-organisms attack the blood to produce biting symptoms, irritation and movement round the body. These sexually transmitted micro-organisms lives in the body mucous membranes such as vagina, rectum (near the anus), throat or hollow of the cheek. Cervical (vagina or cervix), penile (penis) or rectal (anus or rectum) gonorrhea may be contracted through sexual intercourse, while oral sex (sucking the penis or the vagina of an infected person) may lead to throat gonorrhea (infection), cervical or penal infections. Untreated gonorrhea can lead to such complications as pelvic inflammatory disease, blood poisoning, arthritis, endocarditis, meningitis, sterility and blindness in babies born of infected mothers. If syphilis is left untreated the bacteria can cause paralysis, convulsion, heart failure, insanity and even death. Mistreated infections of gonorrhea, causes staphylococcus- aureus. This venereal or sexually transmitted diseases destroys organs in the body until death if not completely cured. This worms that result from these sexually transmitted micro-organisms in women cause painful, irregular menstruation, and destroys pregnancy. You need not to be a womanizer before you get this sexual transmitted diseases, you can equally get it the day you are testing it (casual sex or unprotected sex) for the first time. Sexually transmitted micro-organisms (bacteria, virus, protozoa, yeast like fungi) work with nervous system. Pinching symptoms appears in any part of the body you voluntarily think you will have the pinching symptoms. A times the pinching symptoms occur involuntarily in any part of the body. Once you contract (catch) sexually transmitted diseases, you start to suffer from priapism i.e. persistent abnormal erection of the penis (man) or clitoris (woman) or at extreme circumstance impotency or erectile dysfunction which is the inability of a sexually mature male (female) to achieve and maintain penile (or clitoris in case of woman) erection and consequently achieve satisfactory sexual intercourse.

Howbeit, sexually transmitted diseases in the body weakens immunity (cell that fight germs in the body i.e. body defense mechanism) of the victim. This sexually transmitted diseases has rendered many marriages childless and consequently leads to separation and divorce. So many married men and women who are aware of these sexually transmitted diseases always go from one pastor to another for prayer because of the movements around their body and the disturbing sound or noise coming out of their stomach without looking for the best solution for their problem. Low sperm counts don’t lead to infertility. The only thing that leads to infertility are the presence of dead sperm or moribund (about to die) sperm and premature or abnormal eggs which result from adverse effect of sexually transmitted diseases on the testis or ovary. Sexually transmitted diseases can lead to mutation (change in the structure of a single gene, the arrangement of genes on a chromosome or the number of chromosomes, which may result in a change in the appearance or behaviour of the organism) which causes natural disabilities e.g. short, paralyse hand and leg, mongolism i.e. congenital (present or belonging to one, from or before birth) condition in which a child is born with mental deficiency and a flattened broad skull and slanting eyes etc.

(A FIRM OF CONSULTANT BIOCHEMIST),