Yes We Can: Obama To Ghana 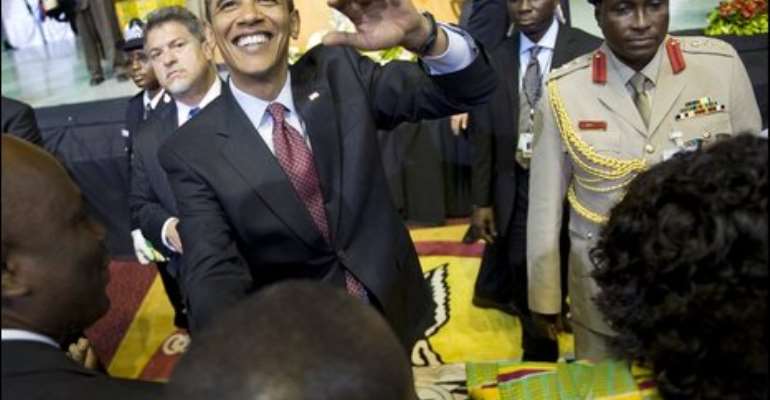 US President Barack Hussein Obama was robust and incisive with his delivery when he addressed the House of Parliament, replaying as he did, his campaign time slogan of “Yes We Can”, so Ghanaians and the rest of Africa can follow the path of development under the aegis of democracy.

The speech, last Saturday, formed the highlight of his 21-hour visit to the country, his first to sub-Saharan Africa since assuming power in America, arguably the most powerful country on the face of the earth.

President Obama did not mince words about his disdain for arbitrariness and the trampling on the freedoms of the individual as he asked Ghanaians and the rest of Africa to champion the cause of democracy.

Former presidents John Agyekum Kufuor and Jerry John Rawlings were part of the audience as the American strongman made flowing delivery.

He was not charitable with persons with the coup mentality as he stated, “Africa does not need strong men, it needs strong institutions”, adding that his country would support efforts at ensuring the prevalence of democracy.

Provision of health is another area the US strongman encouraged his hosts and the rest of Africa to uphold.

Corruption, he noted, is not in the interest of investment, explaining, “No business wants to invest in a place where the government skims off 20 percent of the top or the head of the port authority is corrupt.”

His love for human rights and the rule of law was copiously manifest in his delivery as he held his audience spellbound.

For him, “no person wants to live in a society where the rule of law gives way to the rule of brutality and bribery.

That is no democracy; that is tyranny if occasionally you sprinkle it with elections” adding, “and now is the time for that style of governance to end.”

He spoke to the rest of Africa, and American missions reportedly made available, large sets to enable people elsewhere on the continent to listen to the first African-American President of the US.

Touching on colonialism on the African continent, as he referred to himself as the man with the African blood, he recalled how his grandfather, even as a village elder, was called “boy” by his employers.

That was the time of artificial borders and unfair trade, he noted.

No country, he said, is going to create wealth if its leaders exploit the economy to enrich themselves or if the Police can be bought off by drug traffickers.

President Obama is the son of a Kansas white woman and a Kenyan herder who became an academic along the line. Obama indeed has a grasp of his African ancestral history which he occasionally recalls in his orations.

Not completely relying on his speech writers, he is known to partake in the preparations of such addresses.

America would not dictate to others but would support the enhancement of democracy, he noted, explaining that conflicts which have been associated with the continent are part of life.

He was quick to add though that “Africa is not the crude caricature of a continent at perpetual war. Yet, for far too many Africans conflict is a pattern of life as constant as the sun.

There are wars over land and wars over resources. And it is far too easy for those without conscience to manipulate whole communities into fighting among faiths and tribes”.

He took exception to such conflicts, saying “these conflicts are a millstone around Africa's neck.”

He sounded favourable about allowing African imports into the US market as he encouraged Ghanaians to strive towards producing food crops for export with such encouraging words as “you can do it”.

Directing this aspect of his speech to the House of Parliament, he said, “This is a new moment of great promise. To realize that promise, we must first recognize a fundamental truth that you have given life to Ghana. Development depends upon good governance.

That is the ingredient which has been missing in far too many places for far too long. That is the change that can unlock Africa's potential.”

President Obama supported the development of the whistleblower concept, the independence of the judiciary and a strong independent media, as he singled out Anas Armeyaw Anas for this work at unearthing negative deeds in society.

He pointed at the presence of both the immediate past presidents as a good sign. Ironically, ex-President Jerry John Rawlings expressed displeasure at meeting the man he handed over to telling a news channel earlier that “I cannot tolerate that guy”.

The guest list was distasteful to Mr. Rawlings as its originators insisted on having both faces of the opposition and government partake in the historic moments.

The next item on the itinerary of the US President was a chopper flight to the Cape Coast for a tour of the slave dungeons and other historical sights.

The Obamas flew back to the US in the evening of Saturday, after a 21-hour stay which caused copious traffic jams in the nation's capital as necessary security arrangements were unfolded by the Police.