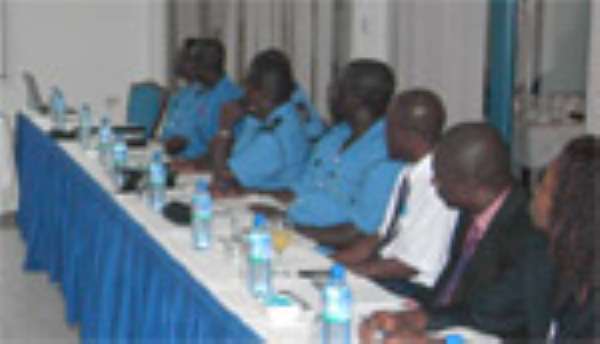 The British American Tobacco (BAT) company and the Customs, Excise and Preventive Service (CEPS) are engaged in a two-day anti-counterfeiting workshop at the La Palm Royal Hotel.

The two organizations signed a Memorandum of Understanding to collaborate in the area of fighting counterfeiting and trading in such products with particular reference to cigarettes.

In his overview of the workshop, Don Ayao Dussey, BAT's Corporate & Regulatory Affairs Manager, West and Central Africa, described the event as another milestone in the fight against illicit trade in Ghana.

The workshop, he said, was a step being taken to support the government to secure all its due revenue and to eliminate illicit trade within its territories.

He posted a successful story about the fight against illicit trade in tobacco products, which he said had dropped significantly from 12 percent in 2004 to less than 6 percent in 2007.

“It is in recognition of the tremendous contribution of CEPS and other security agencies to reducing the illicit trade that we donated 12 jungle motorbikes to help CEPS in their efforts to have better control of our borders and the product flow,” he said.

BAT, he said, was committed to setting high standards of good corporate citizenship by helping to improve the capacity of their partners in the process of eliminating illicit trading activities.

Collin Denyer, a Senior Investigations Manager of BAT in his presentation on the global impact of illicit trade disclosed that theirs was to take the leadership position in the industry and overtake Philip Morris.

It was also the aim of BAT to work with governments toward responsible growth.

The World Health Organisation, he said, forecast that between 2010 and 2020, the illicit trading activities would overshadow genuine business.

The illicit trading activity in tobacco products, he noted, was the greatest challenge to BAT, adding that though cigarette consumption had plummeted worldwide, duties had increased for the products.

Some 12 countries mostly in Africa and the Middle East accounted for most of the financial losses of BAT in terms of illegal trade in tobacco products.

Nigeria with a very big market, he pointed out, accounted for $48 million, followed by South Africa with $44 million.

There was a solidarity message from a Coalition against Counterfeit and Illicit Trade read by a certain Kofi Essuman.

The coalition pledged its readiness to assist in combating the counterfeiting of products, which it noted was counter-productive to the economic interests of the country and local industry.

A number of resource persons from BAT and local relevant organizations like the Ghana Standards Board were billed to grace the workshop with presentations.

Two years ago, CEPS destroyed large quantities of cigarettes bearing brand names of BAT as part of the collaborative deal between the two organisations.