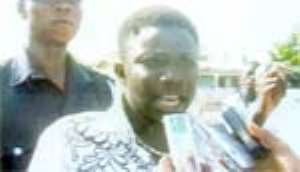 Collins Agyei Yeboah, a pastor who sought the help of a renowned fetish priest at Akomadan-Afrancho in the Ashanti Region to establish a church known as Vision Charismatic Chapel at Kato near Berekum in the Brong Ahafo region, has lost his powers.

This followed the recovery of the juju from the pastor by the fetish priest, Nana Kwaku Bonsam and his allies on Wednesday April 2 this year.

Two years ago, Mr. Agyei Yeboah, founder and leader of Vision Charismatic Chapel allegedly consulted Nana Kwaku Bonsam at his shrine in Akomadan-Afrancho for a special juju to establish a church at Kato, his hometown.

The prominent fetish priest, who had hit the news recently, obliged and prepared a special juju at the cost of GH¢550, out of which the pastor instantly paid GH¢100, promising to pay the remainder in a few days.

Pastor Agyei Yeboah, after taking delivery of the juju, came back a few weeks later and paid an additional amount of GH¢100 to Nana Kwaku Bonsam.

According to the celebrated fetish priest, the pastor, believed to be in his early thirties, failed to settle the balance of GH¢350 two long years after utilizing the juju powers to establish his church.

“In spite of numerous reminders to him to pay the remaining GH¢350, Pastor Agyei Yeboah refused to honour the payment with the flimsy excuse that the juju he collected did not work,” the fetish priest stated.

Nana Kwaku Bonsam disclosed that this stubborn stance of the so-called man of God incensed his gods who quickly ordered the retrieval of the juju from Pastor Agyei Yeboah.

He explained that the gods spelt out two conditions for him, which were either that the juju be retrieved from the pastor or he, Nana Kwaku Bonsam would lose his life in a matter of hours.

The fetish priest said not wanting to lose his life, he organized his guys and headed for Kato on Wednesday with the mission to dispossess the pastor of the juju.

Anticipating a possible resistance from Pastor Agyei Yeboah, Nana Kwaku Bonsam noted that he first sought permission from the Divisional Police Commander of Berekum before proceeding to the church premises.

He said when he and his guys got to the church hall around 12 mid-day, the first service was just over and church members were in a queue to attend counseling session.

“When he saw me, he was shocked and could not utter a word, so I just asked him to give me the powers in a matter of seconds if only he was desirous to live again,” he pointed out.

According to the famous fetish priest, Pastor Agyei Yeboah who was visibly shaken, could not put up any resistance but willfully went to the back of the church where he had placed the juju, retrieved it, and delivered it to the owner.

Nana Kwaku Bonsam indicated that after accomplishing his mission, he and his entourage went back to thank the Berekum Divisional Police Command before returning to base.

He disclosed that the whole township of Kato went agog when news went round that the fetish priest who gave juju to Pastor Agyei Yeboah to establish his church had come to collect back the juju.

Nana Kwaku Bonsam noted that but for the intervention of the police officers who accompanied him to the church premises, the leader and founder of Vision Charismatic Church would have been lynched by the angry church members in whose presence the exercise took place.

“The police had to whisk him away, to prevent him from being lynched by the angry church members in whose presence the retrieval of the juju took place,” he said.

The popular fetish priest gave stern warning to pastors who had sought his help but were not performing the necessary rites, to contact him immediately before he descends heavily on them.

He shockingly revealed that more than 460 pastors including renowned and influential ones had come to him for one form of power or the other in establishing and sustaining their churches in the country.

Later in an interview, Pastor Agyei Yeboah admitted taking juju from Nana Kwaku Bonsam but asked his church members and the townsfolk to pardon him, stressing that never will he commit such a sacrilegious act again.

He said he was ready to continue with the church if only members would forgive him.

From Morgan Owusu, Kato, near Berekum

'Captain Smart arrest is intolerance, he did no wrong' – Med...
25 minutes ago