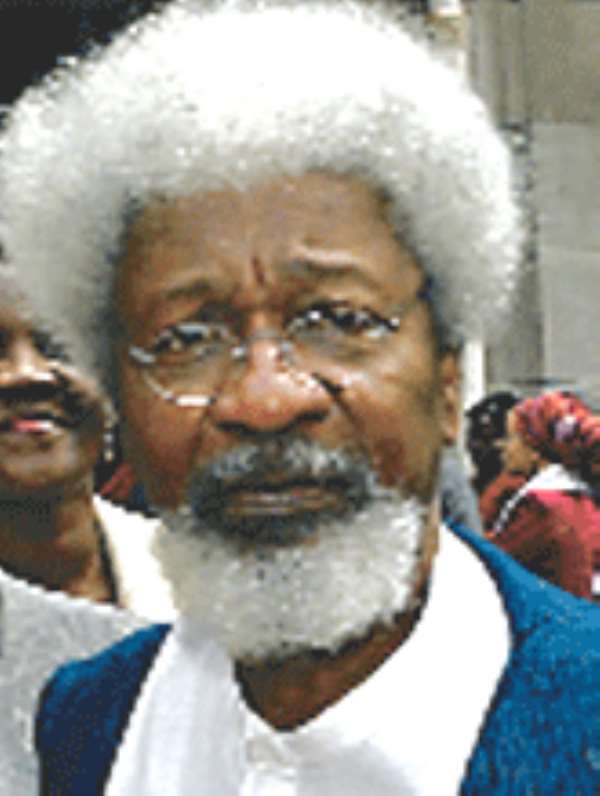 A Nobel Laurette, Professor Wole Soyinka, on Wednesday launched the second edition of a book entitled Between Faith and History: A Biography of J.A. Kufuor in Accra.

The 400 page hard-cover edition was written by the Ghanaian author and journalist, Ivor Agyeman-Duah, who also heads the public affairs department at the Ghana High Commission in London.

The launch was attended by the Vice-President, Alhaji Aliu Mahama, Ministers of State, traditional rulers, leaders of political parties, members of the diplomatic corps in Ghana, the business community and academia.

Under the auspices of the Centre for Intellectual Renewal (Ghana), Ayebia Clarke Press Limited (Oxfordshire) and the endorsement of the Arts Council of England, the book is not only about Kufuor's life as a politician and the effect of his career (including six years of his Presidency) but, the contemporary history of West Africa, which Soyinka, 73, uses as his artistic canvass.

Soyinka, the first African to win the Nobel Prize in Literature in 1986, used the platform to continue his crusade against slavery, rape, torture, human rights abuses and poverty in Africa and other developing countries.

He condemned the exploitative dominance of the West, trade imbalances and the negative effects of globalisation on developing countries.

Professor Soyinka who lived in Ghana in the mid-1970s as a university teacher and editor of the then influential literary magazine-Transition (now edited from the United States by two of his distinguished 'students' and colleagues-philosopher, Kwame Anthony Appiah of Princeton University and Henry Louis Gates Jnr of Harvard University), was not happy with traditional practices that enslaved women and cited the Trokosi system practised in parts of Ghana.

He attacked the international community and various governments for being mute over the massacres and human rights abuses in Darfur, Sudan and the killings in Rwanda.

Professor Soyinka urged Africans not to copy blindly from the West.

Vice-President Aliu Mahama, said the act of preserving the lives and actions of leaders through writing could shed light on the circumstances and motives impacting on a nation's progress or otherwise.

“If it portrays success, it offers valuable motivation and guidelines for aspiring leaders. If negative, it offers the chance to correct its mistakes and aspire to better governance,” he said.

The Vice-President said all Ghanaians deserved to know the real story of governance in Ghana, adding that, “in particular, the present generation deserves to understand the mishaps in governance which led to steep decline in national wealth and living standards.”

He said Ghana had moved from an economy which had virtually collapsed to a position where it sought to redenominate its currency in near parity to the dollar.

The CEO of the Ghana Cocoa Board (COCOBOD), Ambassador Isaac Osei, who chaired the programme described President Kufuor as the first Ghanaian liberal democrat who had won political power and kept it for six years.

He explained that Dr J. B. Danquah, a founding member of the Danquah/Busia tradition, never won political power while Dr Kofi Abrefa Busia, the Prime Minister of the Second Republic won power but could not keep it.

Nana Ayebia Clarke, the Publishing Director, and the Adantahemaa of Larteh said "I published this book because the history of Ghana has tended to be recorded by outsiders and I felt the need to be involved to rectify this imbalance.”

“We have proved that we as Ghanaians and Africans are capable of creating many of our own institutional structures based on our own needs.

We need to do more to celebrate our successes. Ivor Agyeman-Duah has made an important contribution to one of our modern day Ghanaian heroes.”

The Chancellor of the University of Cape Coast and former President of Anglogold Ashanti, Dr Sir Sam Jonah, was among the special guests.