Olumakaiye, a Quintessential Developer and an Evangelist - Oluyamo

...calls on new Osun Governor to ensure payment of backlog of salaries and pensions
By Abiodun KOMOLAFE 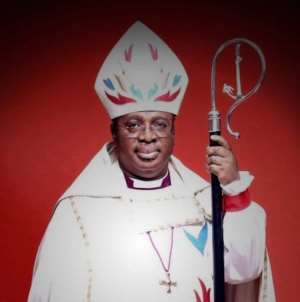 The Bishop of Ijesa North Anglican Diocese, Rt. Rev Dr. Isaac Oluyamo has described the late Bishop of Lagos and Archbishop of Lagos Province, Most Rev Dr. Humphrey Bamisebi Olumakaiye as a man of God, a quintessential developer and an evangelist.

This is just as the Bishop called on the newly-inaugurated Governor of Osun State, Senator Nurudeen Jackson Ademola Adeleke to fulfill his promise by paying the backlog of salaries and allowances of the civil servants and retirees respectively.

Bishop Oluyamo stated these recently, while delivering a speech at the 2022 Diocesan Summit of Ijesa North of the Anglican Communion, which held at St. Matthew’s Anglican Cathedral, Ijebu-Jesa in Osun State.

Oluyamo said the death of the Archbishop came as a rude shock, but then, the Diocese just has to surrender to the will of God who gives and takes.

The religious leader, who called on Adeleke to ensure the fulfillment of all his promises to the people, congratulated the new governor on his election and inauguration, urging him to serve the people with love and accountability.

While charging the governor to be prudent and accountable, the clergyman said the upliftment of the people out of poverty and underdevelopment should be of paramount importance.

He added that the entire Ijesa North Anglican Diocese would continue to pray for him to have the wisdom to deliver good governance and have a successful tenure of office.

In his words: "I heartily congratulate our new governor, Senator Ademola Adeleke on his election and recent swearing-in ceremony. We believe that it is the Lord's doing for him to be the governor of our dear State at this time.

"I want to urge him to rule the State with the fear of God and the love of the masses at heart. With these two things in mind, he will hardly commit any errors. He should always remember that the people of the State willingly gave him the mandate through their votes and he should not let them down.

"I strongly implore him to fulfill all his promises to the people, especially as they concern the civil servants and retirees. He should endeavor to pay the backlog of salaries of the workers and pension of retirees because it is their due and they have laboured for it."

Speaking on the summit, Oluyamo explained that the summit provided a one-of-a-kind experience of reconnecting with God and transforming relationships, adding that it’s a time to talk to God personally and corporately.

He maintained that the summit afforded the opportunity of engaging in strategic conversations while also engaging in issues and raising questions on the big picture for the entire church family.

Speaking with newsmen at the summit, the Alase of Ilase Ijesa, Oba Jimoh Isiaka Adesina called on Christians worldwide to love their neighbors and render assistance where necessary as it’s the essence of serving God.

According to the monarch, since the major essence of man's relationship with God is love, those who serve Him must show love to everyone around at any point in time.

Also speaking, the Chancellor of the Diocese of Ijesa North, Mr. Adeleke Agbola (SAN) urged the Church to be sacrificial and winning souls for Christ, saying people should stop seeing the building as the Church. Instead, they should recognize the worshipers as the Church.