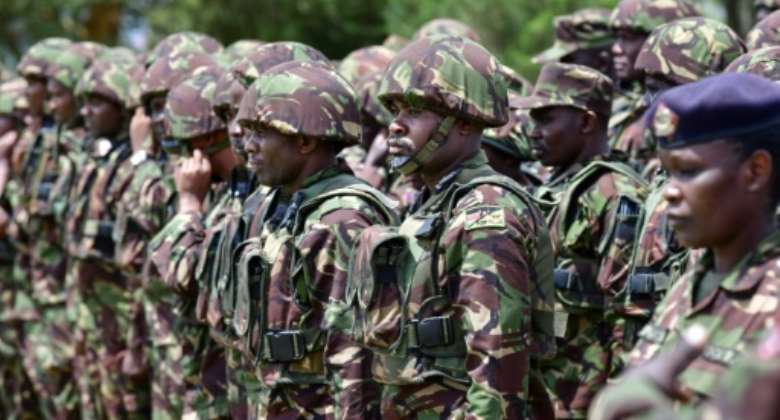 Kenyan troops, deployed as part of an East African Community (EAC) force, arrived in the volatile region on November 12.

The regional force will "enforce peace on those who are hellbent on creating instability," Ruto said in a news conference in the Democratic Republic of Congo's capital, Kinshasa.

The M23, a largely Congolese Tutsi militia, has seized swathes of territory across North Kivu province, edging towards the region's main city of Goma.

The fighting has reignited regional tensions, with the DRC accusing its smaller neighbour Rwanda of backing the M23, something that UN experts and US officials have also said in recent months.

Kigali denies supporting the M23 and accuses Kinshasa of colluding with the FDLR -- a former Rwandan Hutu rebel group established in the DRC after the 1994 genocide of mainly Tutsis in Rwanda.

But it re-emerged late last year, claiming the DRC had failed to honour a pledge to integrate its fighters into the army, among other grievances.

Kenya is sending about 900 troops to the DRC as part of a joint EAC force created to help restore security.

The rebels have been pushing towards Goma, the main city in North Kivu province. By Valentin RAKOVSKY (AFP)

Ruto said he was aware that there are already peacekeeping forces present in eastern DRC -- alluding to the thousands-strong United Nations force -- but suggested that East African troops would be more forceful.

"From what see in the region, we do not think there is much peace to keep," he said.

Kenyan General Jeff Nyagah, the commander of the EAC force, also said when he arrived in Goma on November 16 that the East African operation would be "an intervention force."

But, he stressed, the priority was to find a political solution to instability in eastern DRC, as well as to disarm militias.

Peace talks under the aegis of the seven-nation EAC were scheduled to be launched in the Kenyan capital Nairobi on Monday, but their start date remains unclear.

Ruto told reporters on Monday that EAC heads of state, in their joint mandate to the regional force, agreed that the mission was to ensure peace as well as enforce it.

Thousands of people have fled to Goma from the advancing M23. By ALEXIS HUGUET (AFP)

The mandate has been communicated to the African Union and the UN Security Council, he said.

The force is expected to include soldiers from Burundi, Uganda and South Sudan, as well as from Kenya. But its intended total size remains unclear.

The UN's peacekeeping force in eastern DRC, known as MONUSCO, has a current strength of about 16,000 uniformed personnel.

But many in the DRC see the peacekeepers as ineffective.

At least 262,000 people have been displaced by the fighting, the UN estimated last week.

The M23 is just one of around 120 armed groups which are active in eastern Congo.

Many of them are a legacy of regional wars that flared before the turn of the century.