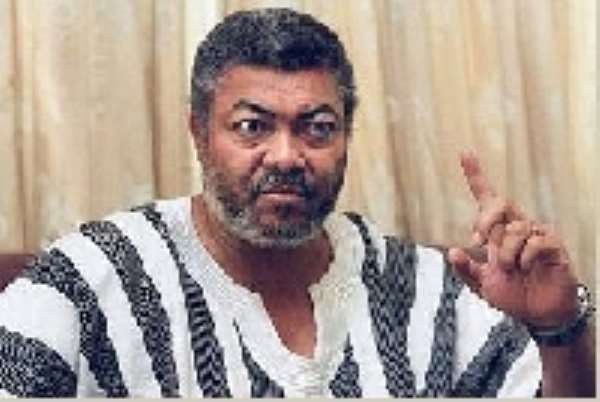 Former president Jerry John Rawlings this afternoon had a press conference at his Residence to react to recent allegations made against him by president John Agyekum Kofour.

Mr. Rawlings who appeared very calm said he was very surprise about the statement made by his successor and considered it to be quite serious. "i wish,therfore to take this opportunity to state emphatically to Ghanaians and those who care to know that i have never solicited and will never solicit funds for the purpose of conducting a coup d'etat in Ghana, i dont know where this allegation is coming from and i wish oiu,nto challenge president Kufour to tell Ghanaians which 'oil-rich country' i contacted and when" said the ex-president.

Mr.Rawlings added that even though the NDC party has already reacted to the wild allegation levelled against him, he considered the claim by the NPP government alleging that he had attempted soliciting funds to "overthrow" the Government serious enough to warrant his personal reaction.

Flanked by his special aide and other prominent members of the Party, the former president said, as far as his trips abroad are concerned, the media has already reported all his speeches he made to Ghanaians while abroad and that those reportage have not convinced Ghanaians that he was on a coup trip but was rather doing what he has always done which is telling Ghanaians the truth about the bad administration and corrupt practices of the NPP government. He said "i shall continue to state this point of view to those who care to listen and not only because it involves the npp government but more importantly because the truth should be universal at all times."

The ex-president challenged president Kufuor to prove the allegations against him and also be bold to mention the names of the oil countries he is soliciting the funds from to topple his government. He expressed shock and dismay at the allegations of the president but emphasised that he was not too surprised that President Kufour chose to implicate countries of the middle east because the whole world now knows that he is carrying out the command of his western

masters whose policy it is to vilify middle Eastern Countries and their religion, alleging that president Kufour's “answer to a western request is not

only 'Yes, Sir, but also How high should I jump!”.

Touching on his family, Mr.Rawlings said even though the president has targeted them for prosecution, he will not be intimidated but will

continue to expose the wrong-doing of the government without relent.

of the country and to advance policies that will lift Ghanaians from the doldrums of porverty, disease and illiteracy.

The President made the charge while addressing a New Patriotic Party (NPP) rally to round off campaigning ahead of Tuesday's Offinso South by-election.

He said the government had credible information that the Ex-President had appealed to the president of an oil rich country to support him financially to destabilize the country.

Kufuor warned that the government had nothing against the Rawlingses, however every force would be mobilized to deal with him if he attempted anything nasty.

Minority MPs stage walk out on approval of deputy ministeria...
9 minutes ago

The Ministry dispatched personnel to ask DCOP Opare-Addo why...
9 minutes ago