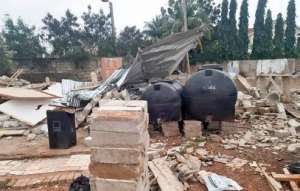 We do not doubt the ability or interest of IGP/Dr. George Akuffo Dampare to deal with the miscreants who have found their way into the Ghana Police Service, and giving the noble profession of policing a bad name.

The IGP, leading the Police Administration, has shown us all that there is no room for reckless use of the authority of the law enforcement department.

One of the stories in yesterday's issue of the Daily Guide was about a story which belongs to failed states yet, took place here in the nation's capital. Fortunately, ours is not a failed state and never will. Why would a commissioned officer, a Deputy Superintendent of Police lead a team of officers to go and demolish a whole house with tenants within it, after marching the occupants out as it were. One of the tenants who called the bluff of the said DSP Bempong was threatened with a firearm by the law enforcement officer.

We do not know what the said DSP from the regional operations wing would have done had the tenants refused to vacate the house. Could he have shot them or he was just bluffing? Wow! It is incredible that this happened in the nation's capital.

Law enforcement officers who allow themselves to be used by estate developers and others to undertake such illegal acts are not fit to remain in the Ghana Police Service.

Money definitely passed hands otherwise a whole commissioned officer won't stoop so low as to engage in such an image-denting and career-destruction undertaking.

The land imbroglios are getting too many in Accra and sometimes we are unable to tell why some people have turned the subject into an industry especially in the nation's capital.

If the appropriate authorities were waiting for a rare opportunity to deal with defaulting public or law enforcement officers, the Greater Accra Regional Command's case under review has offered one.

We shall follow this matter to its logical conclusion because that is the only way, we too, can contribute towards ridding our country, Accra especially, of land stealing by persons who think that with money they can breach the laws of the land and go Scot-free.

We wish to congratulate the owner of the house, a woman, for bringing this issue to light.

The order to demolish houses already being occupied by tenants by courts of competent jurisdiction is rare.

Those who suspect foul play in the actions of police officers must report these to the appropriate quarters for redress. The woman has shown that Ghana is ruled by law not by irresponsible persons who have found themselves in a profession they do not belong to because of their bad characters.

We stand by the IGP's action.