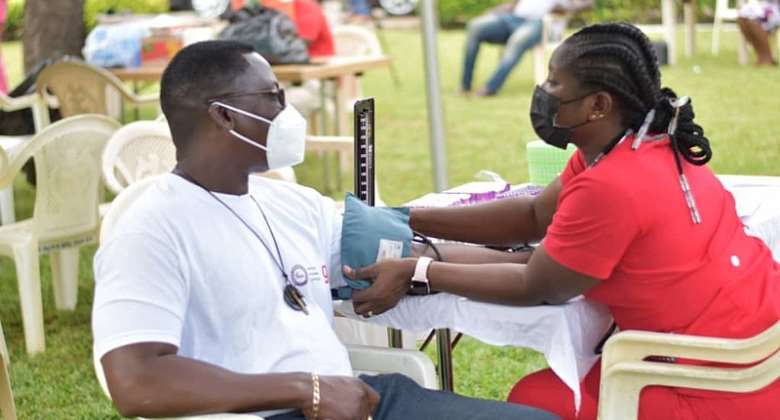 He said the figure is above the World Health Organisation (W.H.O) accepted standard of 70 out of 100,000 live births attributing majority of maternal deaths to bleeding during or after childbirth.

The Insurance Industry Blood Donation Campaign, an initiative of the National Insurance Commission was started last year and the NIC has declared August as the blood donation month.

Dr. Shirley Owusu-Ofori, the Chief Executive Officer of the National Blood Service (NBS) said the World Health Organization (WHO) recommended rate for blood adequacy ratio was 10 units per 1000 people, however, Ghana had only 5.7 units of 1000 people.

She said per the W.H.O recommendation, if one per cent of the country’s population donated blood, there would be enough blood at the various hospitals in the country.

Thus Ghana needs about 320,000 people, constituting one per cent of the population to donate blood, but there are only about 170,000 donors.

Dr. Justice Ofori, the Commissioner of Insurance, said the blood donation campaign is a commitment of the insurance industry players in the country to save lives.

He said as part of the programme last year, the insurance industry players across the country donated 802 units of blood to help stock the blood banks.

Dr Justice Ofori said this year’s blood donation exercise would be done throughout the country and expect to generate more pints of blood.

E-Levy: Gov’t determined to behave like a vampire to suck th...
55 minutes ago

Gov’t will hide behind IMF discussions to force more hardshi...
55 minutes ago