By Dion Forster - The Conversation
Article 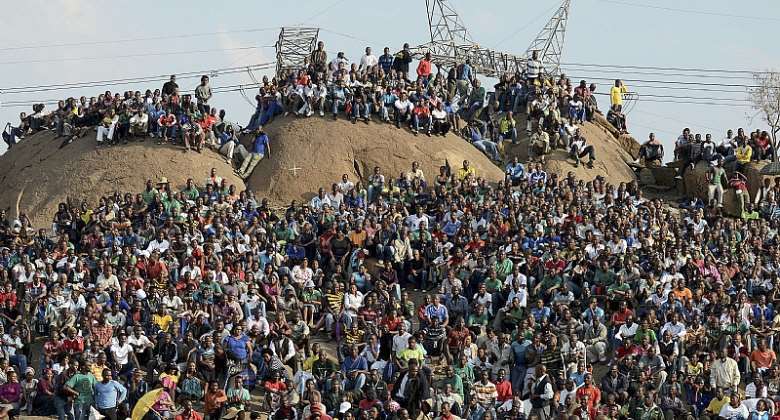 Hundreds of people gather on the small hill were some of the Marikana miners were shot by police in 2012. - Source: EFE-EPAS/Stringer

On 16 August mine workers, activists and no doubt a few politicians will gather on the now infamous rock outcrop near the former Lonmin Platinum mine in Marikana, North West province, to commemorate the 10th anniversary of the Marikana massacre . This was the most lethal use of force by the South African police since the 1976 Soweto uprising against the then apartheid regime. At least 138 people died in three days .

In fact, the Marikana massacre was so brutal that it has been likened to the 1960 Sharpeville Massacre , where apartheid police shot unarmed civilians in their backs as they fled, killing 69. They were protesting against identity documents that black people were forced to carry, restricting their movement.

Between 12 and 16 August 2012 a total of 47 people died. Among them were 34 miners from the Lonmin Platinum mine shot by police. Another 10, including two policemen and two mine security guards , were killed by protesting mineworkers. Three others died after the strike had ended. In addition, 78 miners were injured. Most of them were shot with R5 military style assault rifles by police officers and security officers from the Lonmin Mine.

This year, the commemoration of the event coincides with my professorial inaugural lecture at the Faculty of Theology, Stellenbosch University. How does my work as a public theologian and ethicist link with violence and the unnecessary loss of life that took place in Marikana?

It transpired as I was conducting some research for my inaugural lecture. I came across a detail in interviews with the striking miners that I had not seen before. Central to the mineworkers' demands was an appeal to decency.

I wish to take my cue from the philosopher Avishai Margalit , who, in his book The Decent Society , asserts that (p.1)

a decent society is one whose institutions do not humiliate people.

He argues that it is the confronting of societal evil that brings us to a politics of decency.

Based on my research into the massacre and its aftermath, I believe that the urgent task in South Africa is to learn to live more “decently in an indecent society” – and never to forget Marikana.

The tradition of the professorial inaugural lecture is that when one is promoted to full professor one should have something to “profess”. Having spent years reading, listening, reflecting, teaching and writing, one would have a body of work, and perhaps even a few ideas, to share.

I really struggled to discern what to say. After all, what would be fitting, responsible, or proper, for a white male ethicist to “profess” in Stellenbosch, South Africa, in 2022? My struggle deepened as I reflected on the indecent, and racist, act of a white student urinating on the belongings of a black student at the university. He has since been expelled .

When the university set the date of my lecture for 16 August 2022, I realised that it coincided with the 10th anniversary of the Marikana massacre. I had previously written about the massacre and its iconic leader, Mgcineni Noki .

That article argued that religious people and faith communities must once again take up the struggle for justice in South Africa as a primary concern. Moreover, two of my PhD students, Jayson Gribble and Jaco Botha, had conducted research on the Marikana massacre. So I was relatively familiar with this painful event in the country's history. However, as I was reading interviews with the miners I came across something that I had not seen before. It shook me.

wanted their employer, Lonmin, to listen to their case for a decent wage. But this threatened a system of labour relations that had boosted profits for Lonmin, and had protected the privileges of the dominant union, the National Union of Mineworkers. It was decided to deploy 'maximum force' against the workers.

Many South Africans have become accustomed to the phrase a “ living wage ”, as used in labour relations. It refers to a minimum income that allows workers to subsist. It's a brutal society in which people would settle for mere living as an acceptable standard.

At Marikana, the workers were clear: they were advocating not only for a “living wage”; they were holding their employer to a higher standard. They wanted a “decent wage”, and they hoped that the rights accorded to them in a democratic South Africa would protect them in their cause.

They wanted to secure a standard of living that could deconstruct the historical indecencies of migrant labour, the separation of families, living in poverty and being humiliated and dehumanised by rich and powerful people and institutions. To them that amounted to at least R12,500 (US$758 at today's exchange rate) a month.

Let us pause for a moment to reflect on this word: “decent”.

Decency for the victims of the Marikana massacre was about more than just meeting their bare needs for survival. Yet, while they were striking for decency, their employer, and the nation, enacted the most violent of institutional humiliations upon them. They were killed in an indecent manner. To date there have still not been any prosecutions of the police and security officers who killed the miners.

Sadly, South Africa and South Africans seem to be slipping ever more deeply into indecency, as shown by the recent gang rape of eight women in Krugersdorp, west of Johannesburg.

The country has one of the highest rates of rape and gender-based violence in the world.

In search of saints

The American novelist Kurt Vonnegut was once asked how he made sense of living through one of the most difficult and violent times in that country's history. The 1970s saw the peak of the Vietnam war , rising poverty , increasing economic inequality , political corruption under President Richard Nixon, and the deepening of American racial injustice. He replied (p. viii),

what made living almost worthwhile for me were the saints I met. They could be anywhere. They are people behaving decently in an indecent society.

If someone were to ask me the same question, I would have to say that I am looking for some ordinary “saints”. In fact, I do see them from time to time. They are people behaving decently amid the indecencies of society.

They are feeding the hungry, advocating for justice , working for peace , and holding the powerful to account .

South Africa needs more people, and collectives, who are committed to living decently, whose commitment is to undo the systemic humiliation caused by the nation's political and economic institutions, which is shamefully overlooked by its citizens. This is an urgent task.

By Dion Forster, Full Professor of Ethics and Head of Department, Systematic Theology and Ecclesiology, Director of the Beyers Naudé Centre for Public Theology, Stellenbosch University

More from Article
ModernGhana Links
How Every Woman is a Beauty Queen Made
Zulu monarchy: how royal women have asserted their agency and power throughout history
Nigerian newborns weigh less if their mothers use biomass fuel - a major health risk
TOP STORIES