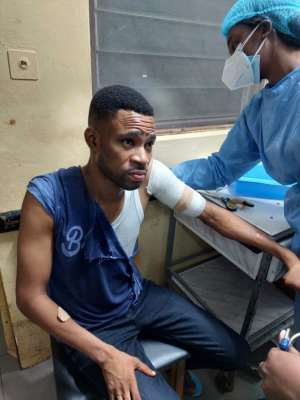 The Ghana Police Service has confirmed that investigations are ongoing into the attack on Angel Broadcasting Network present, Stephen Kofi Adomah.

Mr. Adoma, who is the CEO of Kofi TV and the News Caster on Angel FM in Accra was attacked over the weekend by armed robbers.

He was returning from Kuntunse when the attackers said to be on motorbikes pounced on him.

He was manhandled and left with wounds on his hands and shoulders.

Following a report to the Police, the Service has taken up the matter and looking for the perpetrators.

“The Police are investigating alleged attacks by some unknown persons on Stephen Kofi Adomah, a staff of Angel Broadcasting Network on August 6, 2022, at Old Ashongman Village in Accra.

“Investigation into the alleged incident commenced immediately the matter came to the attention of the Police,” parts of a Police statement said on Sunday night.

Fortunately, Stephen Kofi Adomah has received the necessary medical care and is doing very well after his ordeal over the weekend.