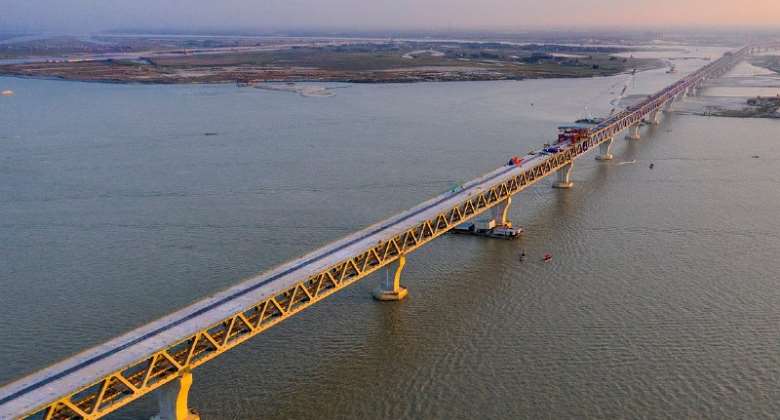 The completion of the construction of the Padma Bridge is a dream comes true for the 170 million people of Bangladesh. It is a unique infrastructural undertaking of the government of Bangladesh led by Prime Minister Sheikh Hasina. It has connected 21 districts of Bangladesh’s Southwest region with Dhaka and the rest of the country.

Asia, which is located in the Eastern and Northern Hemispheres, is the biggest and most populated continent on Earth. There are five regions in Asia. These include Western Asia, Central Asia, East Asia, South Asia, and Southeast Asia. The geopolitical significance of Asia has been increasing due to the rivalry among great powers and the increasing economic might of Asian countries.

Moreover, the presence of geostrategic locations in the Asian continent has attracted other countries from different regions to Asia. With an emphasis on guaranteeing access to new markets, efficient transportation of goods and services, and energy security, inter-regional connectivity has been a prominent policy goal among the Asian nations. Many unilateral, bilateral, and multilateral initiatives have been taken on a regional and inter-regional basis to improve overall connectivity. Bangladesh as a country in South Asia can be a regional transportation hub given its strategically significant location adjacent to the Bay of Bengal and the Indian Ocean. It connects South Asia and Southeast Asia. Now, with the construction of the Padma bridge, Bangladesh expects to contribute to boosting inter-regional connectivity by complementing existing connectivity projects and beyond.

How Does It Boost Inter-Regional Connectivity?

In the early 1990s, the political and economic shifts of the continent encouraged fresh interest in an Asian Highway network, a concept initially proposed by the United Nations Economic and Social Commission for Asia & Pacific (UNESCAP) in 1959. The Asian Land Transport Infrastructure Development Project (ALTIDP) was taken in 1992 with the goal of connecting all the Asian nations through the development of ports, railroads, and highways. The project consists of three pillars and two of them are The Asian Highway (AH) and The Trans-Asian Railway (TAR). The Asian Highway network consists of 144,630 kilometers of highways that connect 32 Asian member nations to Europe. In July 2005, an “Intergovernmental Agreement on the Asian Highway Network” took effect. On November 8, 2009, Bangladesh officially joined the Asian Highway Network. Bangladesh is traversed by the AH-1, AH-2, and AH-41. The Asian Highway-1 includes the Padma bridge which connects India’s West Bengal to its landlocked northeastern province.

Another connectivity project under the ALTIDP umbrella is the Trans-Asian Railway (TAR). One of three rail land bridges connecting Asia and Europe, Bangladesh is situated on the Trans-Asian Railway’s Southern Corridor. Three routes in Bangladesh have already been added to the TAR network. However, a new fourth route has been added that would link Bangladesh with Myanmar and China by utilizing the rail route of the Padma bridge.

The BIMSTEC, also known as the "Bay of Bengal Initiative for Multi-Sectoral Technical and Economic Cooperation," is a sub-regional grouping encompassing South and Southeast Asian nations, including Bangladesh, Bhutan, India, Myanmar, Sri Lanka, and Thailand.

The BIMSTEC Transport Infrastructure and Logistics Study (BTILS) was launched in 2005 to identify the problems that were hampering inter-regional connectivity. The study, which was finished in 2008, found 11 marine gateways, 15 airline gateways, 4 rail routes, 14 road routes, and 2 gateways for the inland waterway. Some of them overlap with the TAR and Asian Highway routes. Among fourteen BIMSTEC Road Corridors (BRC), seven road corridors go through Bangladesh. They are BRC-1, BRC-4, BRC-5, BRC-6, BRC-8, BRC-9, and BRC-11. Among them, BRC-1 goes through Kolkata-Petrapole (India)/Benapole (Bangladesh)-Dhaka-Akhaura-Agartala. Here, the Padma bridge will connect Benapole with Dhaka and all the way to Agartala. Besides road corridors, two BIMSTEC proposed rail routes travel through Bangladesh. That is BTILS Route 1 and 3.

Another sub-regional cooperation group is BBIN. BBIN countries signed the “BBIN Motor Vehicles Agreement (MVA) for the Regulation of Passenger, Personal and Cargo Vehicular Traffic between Bangladesh, Bhutan, India and Nepal” on June 15, 2015. Under the BBIN MVA, several routes were identified for passenger vehicles, cargo service, and pipelines. The Padma bridge will help Bangladesh to maximize the utility of its Benapole and Mongla ports which are situated in the southwest part of the country under the BBIN MVA for both passenger and cargo service in relation to India, Bhutan, and Nepal. In the BBIN region, the Padma bridge may potentially serve as a catalyst for the development of sub-regional economic integration. Although Bhutan has pulled out of the deal, other countries have decided to go ahead. But the recent completion of the Padma bridge may encourage Bhutan to rejoin the agreement since mutual advantages are involved there.

BIMSTEC has also taken a 10-year strategy and action plan from 2018 to 2028 which is known as “The BIMSTEC Master Plan for Transport Connectivity” with the support of the Asian Development Bank (ADB) to improve inter-regional connectivity in Asia. The Master Plan lists 267 connectivity development projects totaling $126 billion, which include existing regional initiatives with new ones. In this scenario, the completion of the Padma bridge is definitely a big boost. The Padma Bridge will be utilized in conjunction with these inter-regional projects, along with different South Asian regional initiatives, and other bilateral and trilateral collaborations to enhance overall connectivity.

The Padma bridge has become a source of national pride for Bangladesh and its people. It not only connects the southwestern part of Bangladesh which has been suffering from poverty and underdevelopment for the lack of connectivity but also connects Bangladesh with its regional neighbors. However, this is not enough to improve regional connectivity. Strong political wills and more infrastructural development are also required.

The Bride will improve inter-regional connectivity. It will not only help to bridge the different regions through physical connectivity but also enhance people-to-people interactions among the different nations which will consolidate the “Asian identity”. Seamless transportation and energy security will be ensured as the Padma bridge will encourage more countries to come forward in order to develop new bilateral, trilateral, and multilateral cooperation with one common goal which is connectivity.

Doreen Chowdhury is a doctoral Researcher at the University of Groningen