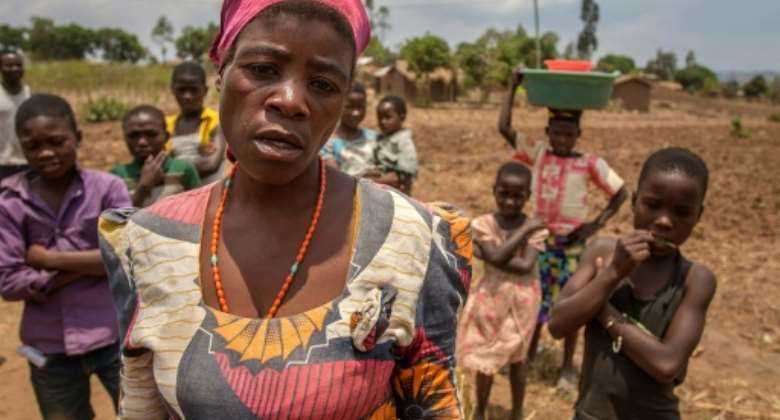 In 2017, rumours of blood-sucking vampires swept southern Malawi -- Jamiya Bauleni, a resident of the village of Ngolongoliwa, was among those who claimed to be a victim of the creatures. By Amos Gumulira (AFP)

The calm air cloaking Lupembe, a sleepy village on the sandy shores of Lake Malawi, conceals a dark secret.

On December 26 2019, a mob driven by rumours of sorcery hunted down and lynched a grieving family.

The killings are among dozens of witchcraft slayings that have shaken the southern African country, prompting talk of dramatic change to colonial-era laws on rumour-mongering.

"Hundreds of villagers descended on our home from all directions and started assaulting me, my brother and my parents," Walinaye Mwanguphiri, 36, told AFP.

Mwanguphiri said he made a lucky escape, but his parents and brother, as well as an aunt, were killed.

Belief in witchcraft in the southern African country is almost as widespread as its poverty -- nearly three people in four live on less than $2 a day, according to World Bank data.

Since 2019, mobs have killed at least 75 people suspected of dark magic, the Centre for Human Rights and Rehabilitation (CHRR), a non-governmental organisation based in the capital Lilongwe, says.

Only last week, local media reported that residents in Dedza, central Malawi, killed the village chief on suspicion he had used sorcery to murder his nephew.

In 2017, the United Nations was forced to pull out its staff from southern Malawi after at least seven people were killed as rumours about vampires swept the region.

Last December, a special commission tasked with drafting legal proposals to address the issue concluded that the best way around the problem was to acknowledge that magic is real.

Malawi's current laws assume that witchcraft does not exist. Under a law drafted during British colonial rule, it is a crime to accuse someone of witchcraft.

But since most Malawians believe in magic, the commission suggested it was better to recognise the existence of sorcery -- and make its practice a crime.

"The commission therefore recommends recognising the existence of witchcraft and states that the law must penalise all witchcraft practices."

CHRR director Michael Kaiyatsa says criminalising witchcraft could help prevent people from taking the law into their own hands to punish suspected sorcerers.

"Witchcraft... is not something that you can see or prove," he said.

His group says killings caused by rumour-mongering have only rarely resulted in arrests and prosecutions.

It brands this a failure of law enforcement that has stoked a climate of impunity and fed the violence. It urges more action to bring killers to justice.

AFP this month visited Lupembe, which lies on a sandy shoreline of Lake Malawi near the border with Tanzania, some 550 kilometres (350 miles) north of Lilongwe.

Outwardly, the village of 700 souls showed little sign of the bloody episode of the recent past.

Men idled on a beach under the morning sun, waiting for a catch of sardines caught overnight to dry, while women washed dishes and clothes.

Inside his grass-thatched home, Mwanguphiri, the survivor, stuttered with emotion as he recounted his ordeal and how he felt to be living today among his family's killers.

The family, he said, had gathered at the village graveyard to bury his cousin's son, who had died after a short illness.

It was then that the mob descended on them.

They accused "us of killing (him) through witchcraft," he said.

Mwanguphiri said he managed to scrape his way through the crowd and ran for his life away from the village, leaving behind his elderly parents and brother, who were beaten to death.

"I survived by a whisker," he said.

The crowd destroyed his house, his brother's and that of his aunt before dispersing, he said.

Law enforcement officers rounded up a couple of villagers but later released them, he said.

The police did not respond to a request for comment.

To this day, Mwanguphiri does not know what triggered the deadly rumours.

After a year away, he returned Lupembe, where he now cares for his brother's five orphans.

"Although it is hard for us to live here after what happened, we have no other option because this is the only home that we know," he said.

"We have nowhere else to go."