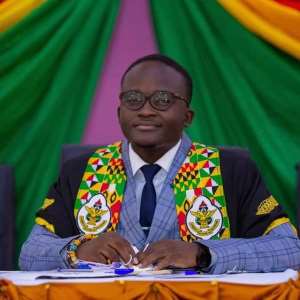 The University Students Association of Ghana (USAG) at its 21st Annual Residencial Congress held at the University of Education, Winneba has elected its national executives to steer the affairs of the Association for a year term of office.

The elections which was conducted by the Association's Electoral Commission saw 23 candidates contesting for the various executive positions of the Association.

A total of 710 delegates drawn from 36 public and private universities across the country cast their votes amidst drumming and dancing from supporters who troops in to support their preferred candidates.

He polled 426 votes to beat two other contenders, Mr. Richard Opoku and Mr. Edmund Brefo both from KNUST polling 179 and 100 votes respectively.

Other elected executives were Press and Information Secretary, Miss Angela Aku-Sika of the University of Ghana, Legon had 271 votes.

International and Diaspora Relations Secretary went to Angela Asantewaa Amoako also from the University of Ghana Legon with 316 votes to beat two other candidates.

Miss Ellen Tarchie Bonsuo of the University of Education Winneba, was elected Women's Commissioner. She polled 458 votes to beat Miss Portia Amankwah of the Kwame Nkrumah University of Science and Technology who got 249 votes.

The rest were Financial Controller, Mr. Osei Fosu Solomon of KNUST 437 votes. Mr. Desmond Adu was elected unopposed for the Treasurer position while Miss Dayan Akpane Ama Green of the University of Ghana Legon won the Coordinating Secretary position with 410 votes against Mr. Agyei Adusei Franklin of the University of Education Winneba who obtained 299 votes.

Two of the aspiring candidates Miss Portia Oduro Frimpong and Mr. Joseph Appiah Dankwah withdrew from the race before the poll started.

DCOP Mr. A. K Amenyo, Central Commander in-charge of Winneba Divisional Command of the Ghana Police Service led a team of Police personnel to provide security at the voting center.