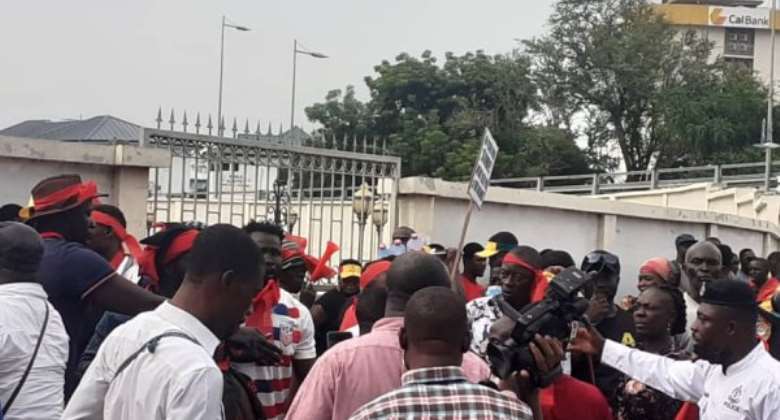 Leaders of Arise Ghana protesters Wednesday called on the Government to put effective policies in place to ameliorate the economic hardships in the country.

The group said the country was facing economic challenges because of the “poor economic policies” by the Government, urging the authorities to be proactive and resuscitate the “ailing economy.”

Mr Bernard Monah, a lead member of the group said this in a petition presented to the Ministry of Finance after a protest march from the El-Wak Sports Stadium.

A copy of the petition was also presented to Parliament.

Mr Monah urged the Government to take urgent steps to ensure that the inflation rate was brought down because the citizenry could not bear the increases in goods and services.

He also urged the Government to address the cedi depreciation because it was worsening the cost of doing business and pushing Ghanaians to import less.

Mr Mornah called on the authorities to collaborate with all stakeholders to urgently find solutions to the issues to lessen the burden on the business community.

He said the country's rising youth unemployment was a threat to national security needing urgent fixing.

"We urged the Government not to reintroduce the 'Agyapa deal' because it will not serve the interest of the nation, " he said.

Mr Mornah also asked the Government to scrap the e-levy policy and, also removed all levies on petroleum products because they were worsening the economic condition of Ghanaians.

He asked that authorities ensure that the Tema Oil Refinery resumed operations to help reduce the prices of petroleum products.

Mrs Asare in response to the petition said the Government had started meeting relevant stakeholders to address the issues, mainly caused by COVID-19 and the Russian-Ukraine invasion.

She said the Government would continue to demonstrate commitment addressing the concerns of the population.

Mrs Asare commended the security personnel for ensuring law and order during the demonstration and said the Government would continue to support efforts towards peaceful coexistence.

The protesters started the demonstration on Tuesday June 28 but were stopped by the Police at 1530 hours in line with a court order.

Disagreement over the use of unapproved route resulted in a clash between the police and protesters with some policemen and civilians sustaining injuries.

Some police vehicles were damaged.

The police fired tear gas after some demonstrators allegedly hurled stones at them.

Some 29 protesters were arrested, others being pursued by the police.

The second day of the demonstration, which started from the El-Wak Sports Stadium in Accra, through to the West African Examination Council, the Jubilee House and to the Ako Adjei interchange stretch ended at the Ministry of Finance successfully.