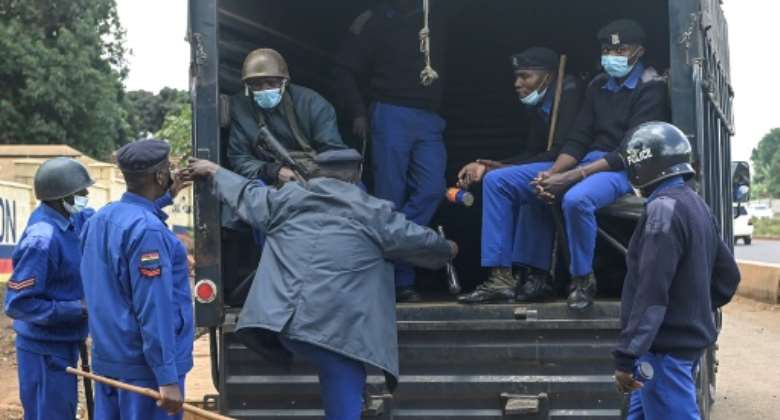 Kenya's police force is struggling with a troubled reputation. By Simon MAINA (AFP/File)

Kenyan investigators said Wednesday they had arrested a would-be MP for impersonating a police officer after she appeared in full regalia on a television programme where she talked about law and order.

The woman, identified as Monica Wamaitha Gitau, was taken into custody after police were notified of her appearance on a local language TV station, the Directorate of Criminal Investigations (DCI) said on Twitter.

Gitau, who is running for parliament in Kenya's national elections in August, was asked about security and politics and provided responses dressed in the distinctive blue uniform of Kenya's police force.

Police were less than convinced about her credibility, the DCI said.

"She is currently assisting with investigations for the offence of impersonating a police officer."

According to a police report of the incident seen by AFP, when confronted Gitau claimed to have been a serving officer who retired in 2011.

"She couldn't give a satisfactory account on why she wore the persian blue colour police uniform with full police badges," the report said.

In 2013, Kenya pledged to root out impostors in its police force after the high-profile arrest of a man accused of masquerading as a top provincial security official for a decade.

Under-equipped, badly paid and trained, the police force has a poor reputation in the East African country, where it is considered among the most corrupt organisations in the country, according to Transparency International.

Under Kenyan law, someone found guilty of impersonating a police officer can receive a prison sentence of up to 10 years, a fine of up to a million Kenyan shillings ($8,500), or both.