Sargassum can reduce cost of building by 40% — York University lecturer 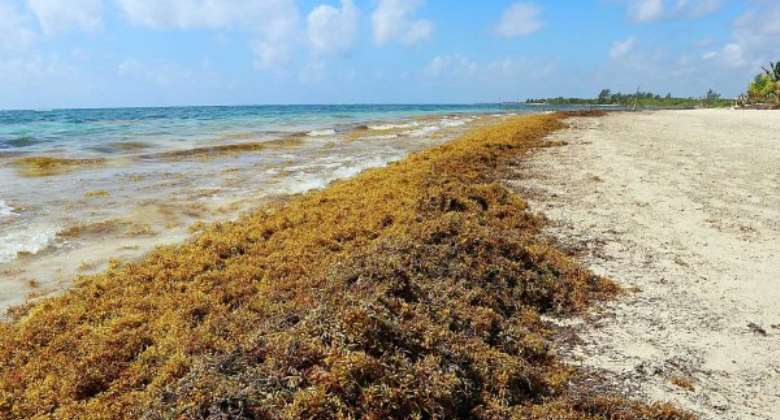 The use of Sargassum, an aquatic invasive weed, which is negatively impacting the activities of fishermen along the coast since 2011, can reduce the cost of building by 40 per cent.

Amidst the rising cost of cement, blocks made with aquatic weed can build a house 60 per cent cheaper than the use of traditional cement.

Dr. Thierry Tonon, a Lecturer in Algal Biology, at York University, UK, said this at a stakeholder workshop in Accra to disseminate findings on Sargassum locally known as brown algae or sea weeds.

In recent times, the shores of Ghana and other West African countries have been experiencing an invasion of Sargassum at shorelines.

Reports indicate that coastal dwellers and the hospitality industry manage the influx in several ways.

Players in the hospitality industry dig and bury landed sargassum whiles coastal inhabitants leave them to dry and decompose at the beach.

“Already, a construction company that makes building blocks from sargassum has designed a machine to make adobe bricks adjusted to process a mix of 40  per cent sargassum and 60 per cent of other organic materials for blocks,” he said.

The machine can produce 1,000 blocks a day, and after four hours of baking in the sun, the blocks are dried and ready to be used.

He said there was a window of opportunity to process the weeds into liquid fertiliser to improve the quality of soil with nutrients, including nitrogen, phosphorus and potassium.

Several companies in the Caribbean, he said, were commercialising liquid plant tonics and fertilisers based on pelagic sargassum.

He said Ghana could explore the opportunity of using the weeds to restore its mangroves, protect shorelines, ensure water quality improvement, biodiversity support through the provision of a range of habitats, and carbon sequestration.

Professor Emma Tompkins, a Professor of Environment and Development at University of Southampton, said sargassum across the tropical Atlantic appeared to be a 'new normal' associated with eutrophication, climate change and natural variability of the climate.

Prof. Kwasi Appeaning, the Director for the Institute for Environment and Sanitation Studies, University of Ghana, said the capacity for sargassum research was being developed to grow innovation in its utilization.

The seaweed, he said, was only viewed as a menace and complete waste by coastal dwellers and those along the fisheries value chain who were directly impacted by the influx.

Those along the fisheries value chain have reported financial losses due to damage to nets and outboard motors and other fishing gear.

They also complain about reduction in fish catch due to reduced fishing periods.

Mr Ebenezer Appah -Sampong, the Deputy Executive Director of Environmental Protection Agency – Ghana/Technical Services, said his outfit was ready to collaborate with others to find a lasting solution to the menace.

Madam Joana Akrofi, an official of the United Nations Environment Programme, stated that sargassum invasion was one of the ocean pollution issues that affected the wellbeing of coastal dwellers.

The GNA gathered that Ghana has no specific policy on the management of sargassum and that seaweed had been reported in the maritime waters of the country since the early 1960s.

They are usually attached to sub-tidal rocks.