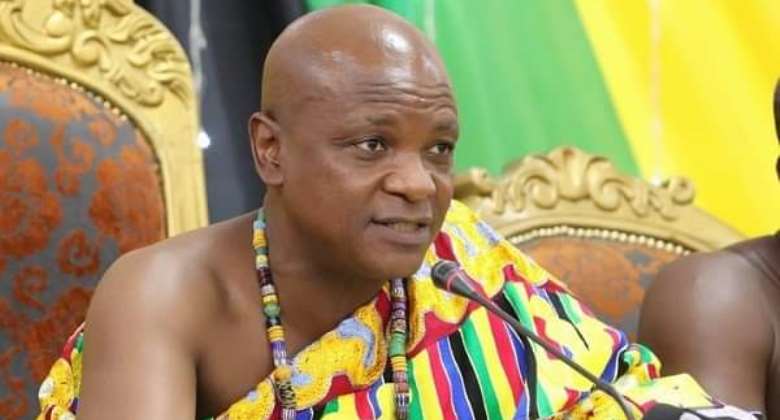 A nation that is in economic crisis and in dire need of economic support both nationally and internationally can benefit from the magnanimity of an honorable man who says - “although it is a constitutional provision that I will be given this amount as ex-gratia, I would rather return it back to the national coffers to mitigate the economic hardship that Ghana is going through” and Paul Adom Otchere and other pro governing NPP journalists says what?

In an era where corruption amongst senior Ghanaian public officials seems to have been normalized under President Akuffo Addo’s administration, Togbe Afede has become the outlier by rejecting a supposed end of service benefit payment amounting to GHC365,392.67. In the midst of the revelation of the bank deposit slip document on the payment available on social media and news outlets, some pro governing NPP journalists, notably Paul Adom-Otchere, have rather berated the Chief of Asogli State for showing exemplary conduct by rejecting the huge ex-gratia cash paid him by the State. The paradox of the whole issue has since been worrisome to most Ghanaians because it is amazing how these pro-government journalists, who could not hide their biases, have attacked the personal principles of the Asogli State Chief for showing exemplary leadership by that rejection.

Togbe Afede XIV, throughout his public life, has been an honorable and fair individual in his dealings with all and sundry. He has shown leadership and courage in tackling social and economic issues in the country irrespective of which party is in power and has duly demonstrated his commitment to promoting Ghana at any given opportunity. Through his initiative, 560 megawatts of energy valued at more than $500 million was injected into the electricity sector in Ghana. He co-founded Databank, which is thriving to date; he published the first-ever Ghana stock market indices, set up several million-dollar businesses, and continues to pursue critical projects of national interest. This is a man who saw poverty in his early life but through hard work and determination was able to overcome his financial challenges and graduate from Yale University. He knows the plight of the ordinary Ghanaian and hasn’t lost touch with reality, so a kind gesture like returning his portion of ex-gratia should be applauded, not condemned. If we had ten of his kind in Ghana doing what he has done, the country would easily rake in over Ghc 3 million for the national coffers.

In any case, what locus has Paul Adom Otchere got to berate an accomplished individual like Togbe Afede? Can Paul point to any project he has spearheaded that brought an investment of even $ 1 million to Ghana? Has he, in his private or public capacity, been able to set up businesses that employ even a hundred Ghanaians? Has he refunded the Christmas tree money that he shamelessly appropriated? Ghanaians need to be wary of a journalist like him whose only claim to fame is doing the bidding of politicians. His unapologetic bias for the ruling NPP government that succeeded in getting him the board chairmanship of Ghana Airport Company Limited should not confuse him or some gullible Ghanaians as a meritorious achievement. When he detaches himself from the NPP and politics and can achieve even a quarter of the successes that Togbe Afede has achieved, we can engage him in intellectual discussions. Until then, he should concentrate on gaining legitimacy in journalism like the late Komla Dumor and Peter Okocha.

Ghanaians must be reminded that it took just a comment to spark war and genocide in an African country. If people like Paul Adom Otchere go unchecked, we as a country are sitting on a time bomb. It’s important to note that if it were Asantehene or Okyehene who did what Togbe Afede did, Mr. Adom Otchere would not dare raise the issues he is raising. That shows a worrying and dangerous posture of tribal bigotry that needs to be nipped in the bud. As such, it is in the right direction that Togbe Afede has given his legal team the go-ahead to drag Mr. Paul Adom-Otchere to court for defamation. ”We are going to sue him because those statements that he made were false statements. We will not let this slide away. As a journalist, fact-check before you give out such allegations.’’ Mr. Stephen Tetteh, the Secretary of the Asogli State Council, explained.

We, the NDC-USA, want to reiterate our profound commendation to Togbe Afede for standing his ground and protecting the already depleted Ghanaian public purse, which President Akuffo Addo failed to protect since he took office in January 2017. Long live Ghana, and long live objective and professional journalists.