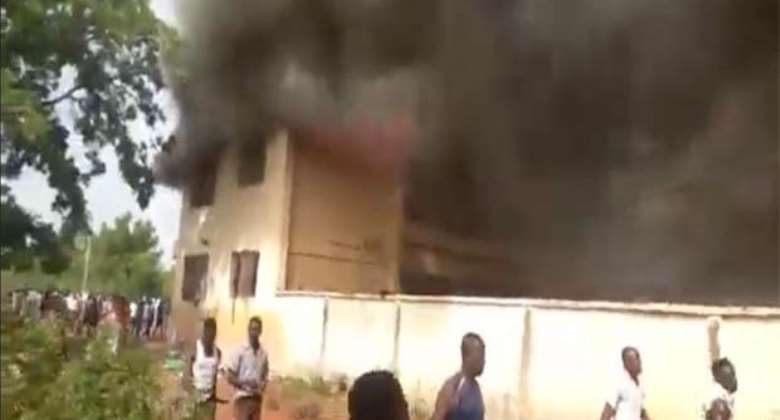 Information reaching this portal indicates that the girls’ dormitory of the Tolon Senior High School in the Tolon District of the Northern region has been gutted by fire.

The incident which happened on Thursday, May 19, 2022, burnt the top floor of the girls’ dormitory.

The fire destroyed school uniforms, chop boxes, mattresses, and books among other learning materials belonging to the students.

The Headmaster of the Tolon Senior High School, Armed Yussif, told journalists that they were in class when some students shouted that the girls' dormitory was on fire.

According to him, they rushed to the scene and realized that they could not control the fire so they called the Ghana Fire Service for assistance.

He said that the incident has been reported to the Northern Regional Education Director, the school's Parent-Teacher Association, and other stakeholders to find ways to accommodate the displaced students.

The Northern Regional Public Relations Officer of the Ghana Fire Service, ADOII Hudu Baba said they received a call from the school about the fire outbreak and rushed to the scene.

ADOII Baba, however, lamented the number of speed ramps on the road from Tamale to the Tolon township.

“ A journey that was supposed to be like 15mins from Tamale to Talon it took us more than 30mins just because of some illegal speed ramps on the road and we counted not least than 28-speed ramps and this is affecting our work because time is precious for us.”