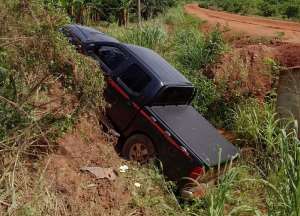 A Deputy National Director of NADMO in-charge of Policy Planning, Research, Monitoring and Evaluation, Boampong Darlington Bill, has been involved in an accident.

The accident happened at about 09:45pm last Friday between Abronye and Boffourkrom off the main Sunyani-Badu Road in the Bono region.

All four occupants of the vehicle sustained various degrees of injuries and were first rushed to a clinic at Aboffour before they were later referred to the Badu Health Centre.

The driver of the vehicle with registration number GT 485-22 was said to have lost control and veered off the main road before landing in a ditch near a recently constructed bridge.

Mr. Boampong, who is seeking to become the next NPP Bono Regional Organiser in next weekend’s regional delegates conference of the party, was returning to Sunyani after a campaign trail last Friday.

He told our correspondent in a telephone interview this morning that all those who were on board responded very well to treatment and had just been discharged from the hospital.

At the time of filing this report, a towing truck had been brought to the scene of the accident to tow the pick-up vehicle to Sunyani.

Meanwhile, Mr. Boampong is expected to pick up his nomination forms today at the NPP Regional Secretariat in Sunyani.

Sources say some friends of the aspirant will pick the forms on his behalf.

Going to the IMF with Ken Ofori-Atta leading will yield no r...
48 minutes ago