Togbiga Wenya, the Leader and Ruler of Dogbos before Sri was born. And other matters 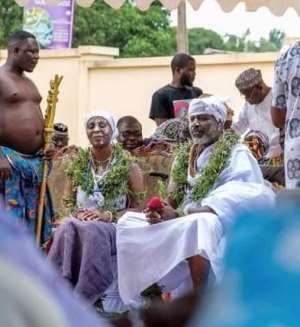 During that time, Togbiga Wenya’s beautiful sister was also present. So Adzashimadi interacted with her and one thing led to the other and the rest is history. At the end, the two adults decided to be together and Kponoe, who later became Sri was born. His uncle, Togbiga Wenya liked him so much and he was moving in and out among the Dogbos and Tandos and grew up into a young man. As to whether the “law of reciprocity” will happen later in life is still a mystery.

When his father Adzashimadi died, fight ensued between Kponoe and his other siblings over their father’s Tandos’ stool, Tsinakpe and who to succeed him. As a clever, very protective and strong man, Togbiga Wenya was able to convince his nephew Kponoe to leave Tandos and come to be with the Dogbos, (Ameyvor 1994) and (Mamattah, 1978). Which is his maternal side. After sometime, he used his influence to bring the Tandos’ stool, Tsinakpe to be under his custody. Before then, the Dogbos already have their great Dzoshikpe stool bequeathed to them by Togbiga Egbe through Togbiga Gemedra. And Togbiga Wenya sits on it as the leader and ruler of the Dogbos.

After all tempers went down, the good and caring uncle who was protecting the interest of his sister’s son, decided to install him on his father Adzashimadi’s Tandos’ stool, Tsinakpe. He did not intall Kponoe on the great Dzoshikpe stool of the Dogbos. According to Prof. Nukunya, 1969, “the key to Anlo kinship is patrilineal descent”. Now as a son, Kponoe inherited from his father, Adzashimadi not his mother’s brother, Togbiga Wenya. Who at that time before installing Kponoe sits on the great Dzoshikpe stool and Agorkorli sits on Anakpe stool.

Togbiga Wenya then introduced Kponoe to the Dogbos as “Sri” (name corrupted). Some great scholars argued that he was made a chief for the youths. It is an established fact that Togbiga Wenya installed Kponoe on the Tandos’ stool not Dogbos’ stool.

After installing Kponoe as “Sri”, Togbiga Wenya remained the leader and ruler of the Dogbos and later Anlos until he joined his ancestors. He was the Leader and Ruler of Dogbos, Field Marshal and Dutor of Anlo. Mamattah, 1978, explicitly stated, “Sri” was one of Togbiga Wenya’s lieutenants, including Kli, Le and others during their migration.

As a leader and ruler, when they finally got to Anlo without Sri, who took different route and even left his Tsinakpe stool in Notsie, Togbiga Wenya, Dutor of Anlo instituted structures in place. And shared governance duties among his siblings and children. Sri later joined them after they have fully settled and comfortable. Togbiga Wenya made others chiefs and protected their inheritance with all his might at the peril of his life and very selfless, which the current Togbiga Wenya III, Dutor of Anlo epitomizes.

But today some descendants of those that he protected are now against his beloved and chosen son, Togbiga Wenya III, Dutor of Anlo. The gods cannot be wrong! Now all those who he made want to unmake him and shred his legacies into pieces. Typical of some Anlo people, who can’t do anything, but don’t even want the rightful owners of the great Dzoshikpe stool to possess their possessions. However, According to the Loafe Clan’s Leaders, those people are only having a pipedream.

For the records, Togbiga Wenya II, Dutor of Anlo worked hand in hand with Togbi Adeladza II, Awormefia of Anlo. His name was explicitly captured in the George L. A. Djabanor’s committee of Enquiry into the affairs of the Anlo Traditional Area report. George L. A. Djabanor was a retired High Court Judge. Not some latter-days pedestrian in the street. This is a public document properly gazetted on 15th December, 1967.

Today we are talking about our own Togbiga Wenya III, Dutor of Anlo. My fellow youths of Anlo, this is the great man for our land, from the rightful clan, chosen by the rightful kingmakers of the Loafe Clan. He is not a stranger, let us together support him to succeed for the betterment of the Anlo land. We need the full and “complete Anlo house” to progress and develop. Let us put our differences aside and put our heads together and think first about the betterment of our land.

The only town hall for the Anlo state that started many years ago is still there uncompleted. Those who are in the sits now are doing their best, but we need more hands like Togbiga Wenya III, Dutor of Anlo for the progress of our dear land. We need a “complete house” where an uncle and nephew can sit down together and plan for the betterment of our people. The future belongs to us and we don’t have to allow this to elude us again. Let us wake up and support Togbiga Wenya III, Dutor of Anlo and other reputable chiefs of Anlo.

Sometimes I sit back and ask, what is wrong with us? Anytime something good want to happen in Anlo land then we resist it with all our might then we go back and sleep. In fact, the “juju man” that cursed the Anlos is so powerful. Just look back home. The future looks very bleak for our generation. Let us allow those who are for us to reign.

Some critics are talking about chieftaincy structures. What are those chieftaincy structures that they are talking about? And who are the people who created those structures? Is it according to the same chieftaincy act that we know? That did not capture some prominent chiefs in Anlo? It seems “we all” forgot after making the usual noise on social media about that critical issue. These are some of the reasons why we need more dynamic hands and wisdom to have the “complete Anlo house” to correct some of these chieftaincy biases against the Anlos at the national level.

According to Prof. Nukunya, 1969, to the English-speaking anthropologist the Ewe are a people about whom very little is known. Since A. B. Ellis wrote his “The Ewe-speaking peoples of the Slave Coast” in 1890, no major study has been made or published on the Ewe in English. For many decades, therefore, this book, which was based on contemporary travel literature, was the sole English work on the Ewes.

To Prof. Nukunya, 1969, the book is remarkable only for its deficiency in facts, and what facts it gives refers to customs generally associated with Dahomey. Consequently, Ellis as an important source book was dismissed by later students of both the Dahomey and the Ewe. Spieth refers to it as of little value; Herskovits condems it as containing nothing new; and D. A. Chapman, an Anlo Ewe, describes it as “Useless”. So based on that premise, some scholars argue that who is that one person who thinks that he holds all knowledge on the historical facts of the Ewes and Anlos of West Africa?

Now there are some of the youths with one particular historical book and misbehaving all over the place. Permit me to quote from a paragraph in that very book; “Le later left the group and settled briefly at Legon, which means Le’s hill near Accra, which still bears his name. He later came back and joined his uncle Fuga in Anlo”, (n.a, n.d). Sharply in contrast to that view, Prof. Francis Agbodeka who was commissioned in 1995 by the University of Ghana, Legon to write the history of the University of Ghana, Legon wrote; “Legon is made up of two “Ga” words. “Le” means “Knowledge” and “gon” means “hill”, hence “Hill of Knowledge”. In fact, I humbly don’t know what you are thinking but I reserved my comments.

The question I dare ask the youths of Anlo is “Where do you want to be when the history of Anlo is written? Do you want to be on the side of facts and progress or facts with embellishments and retrogression? To the Loafe Clan’s Leaders, they know that the history of the Ewes in general and Anlos in particular will never be completed without their father, Togbiga Wenya, Dutor of Anlo. And they want to make it vehemently clear that the reign of Togbiga Wenya III, Dutor of Anlo remains forever.

Author: “Struggles on the Path of Sorrows” and “The Hero that Never was”