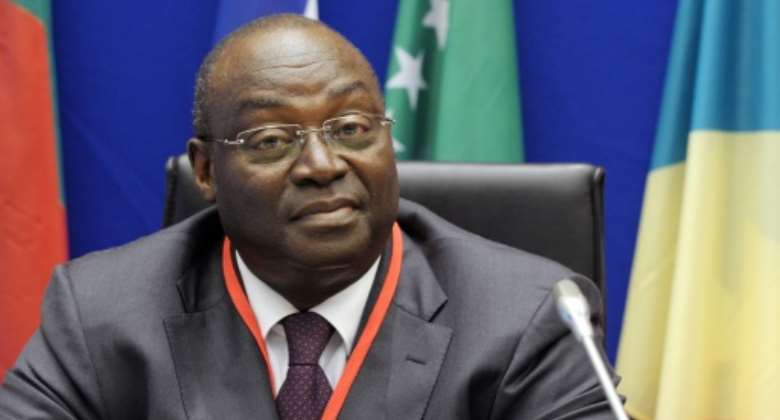 A technocrat, Tiemoko Meyliet Kone has been in charge of West Africa's central bank since 2011. By Eric PIERMONT (AFP/File)

Ivory Coast President Alassane Ouattara on Tuesday said he had appointed Tiemoko Meyliet Kone, the governor of the Central Bank of West African States (BCEAO), as his vice president.

Kone, who has been at the BCEAO's helm since 2011, is a "brilliant economist," Ouattara said in a state-of-the nation address.

He added that Prime Minister Patrick Achi would be reappointed at the head of a reshuffled cabinet.

The government stepped down in a long-expected move last Wednesday ahead of ministerial changes expected to place the emphasis on belt-tightening.

Ouattara, aged 80, has been in power since he won elections in 2010, whose disputed outcome sparked a brief but bloody civil conflict.

His succession has been a key issue in the West African state, fuelling tensions that have boiled over into violence.

Ouattara had made plans to retire in 2020 after two terms in office, but the scheme was put on hold after his anointed successor, then prime minister Amadou Gon Coulibaly, died suddenly.

Ouattara dusted off a bid for a third presidential term, sparking bitter criticism that he was circumventing term limits under the constitution.

Scores of people died in election-related violence, and the country's main opposition boycotted the polls.

In its aftermath, Ouattara last year ushered in his former rival and predecessor, Laurent Gbagbo, who has played the role of elder statesman in a declared effort of national reconciliation.

The post of vice president, scheduled under the constitution, has been vacant for nearly two years.

In his speech before both houses of parliament in the political capital Yamoussoukro, Ouattara heaped praise on Kone.

Kone, he said, "has all my confidence."

"He is a figure who has demonstrated his personal and professional quality at every senior level that he has occupied in public service, the Ivorian government and outside Ivory Coast," Ouattara said.

Referring to Achi's reappointment, Ouattara said, "The government that will take office this week will be streamlined to take into account the world economic outlook and the need to reduce state expenditure."

Achi has been tasked with forming a government with a maximum of 30 ministers, compared with more than 40 today.

Eyeing concern about rising inflation,the authorities last month placed a ceiling on the price of around 20 staple products, such as rice and sugar.

The government is also worried that jihadists who have launched a bloody campaign in the Sahel region to Ivory Coast's north are seeking to push southwards towards the Gulf of Guinea.

Achi was appointed in April last year after his predecessor Hamed Bakayoko died of cancer the previous month.

Bakayoko himself succeeded Coulibaly on his death in July 2020.