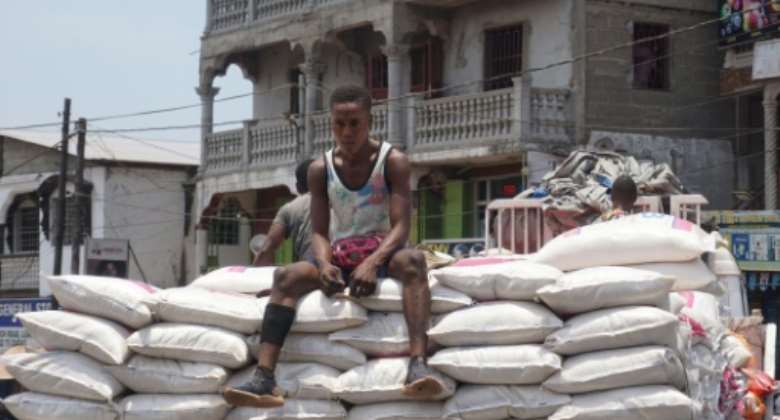 Iyesatu Turay, who lives in a sprawling slum of corrugated-iron shacks in Sierra Leone's capital Freetown, says she doesn't have enough food to feed her family.

Life is a struggle for many in the Kroo Bay slum, where pigs mingle with stray dogs in the debris-strewn alleys of the shantytown, which straddles an open sewer.

But war in faraway Ukraine has made life harder still. Fuel prices, as well as the prices of basics such as cooking oil and rice, have increased sharply in the West African nation recently.

"We need help," said Turay, a 28-year-old mother of three, who explained that price hikes are hitting at the same time as regular power cuts and a patchy water supply.

"We are barely surviving on a single meal every late evening," she told AFP. "No food, water and light."

Diamond-rich Sierra Leone is one of the poorest countries in the world, still recovering from a brutal 1991-2002 civil war and the 2014-2016 West Africa Ebola epidemic.

Diamond-rich Sierra Leone is one of the poorest countries in the world. By Saidu BAH (AFP)

Warnings that the economic blowback of the war in Ukraine could hit poorer countries have already become a reality in the nation of 7.5 million people, where about 43 percent of the population live below $1.90 a day, according to the World Bank.

Musa Sesay, a grocer in Freetown, told AFP all his suppliers had raised their prices.

"We are not responsible for the increase in prices, it's a global problem," he said.

The PRA cited supply issues related to the deteriorating "geopolitical situation in Europe" as the reason behind the move.

Fuel prices, as well as the prices of basics such as cooking oil and rice, have increased sharply in the West African nation. By Saidu BAH (AFP)

Sierra Leone's government says it intervened to cushion the blow to motorists -- increased pump prices are lower than the increase in costs for importing fuel.

Still, commercial drivers went on strike in Freetown after the price hike and blocked several roads in the city. Police had to fire teargas to clear the streets of protesters.

Four years into the first term of President Julius Maada Bio, it is now unclear whether the 57-year-old will be able to deliver on a campaign promise to tackle poverty and hunger.

"We have no business to do with the war in Ukraine, but our people are suffering here," the president said during a live broadcast with business representatives this month, pledging to make decisions to help "ordinary people".

The latest crisis has come with Sierra Leone already struggling to regulate its power supply, deliver drinking water to many under-served citizens, as well as control inflation.

In 2020, the government signed a five-year deal with Karpowership, a Turkish operator of floating power plants, to supply electricity to the country.

In a statement on April 5, Sierra Leone's central bank also said inflation was running at 17.6 percent in February.

On Thursday, the United Nations World Food Programme warned in a statement that West Africa was already facing an "unprecedented food and nutrition crisis", with more people now at risk because of the high prices linked to the Ukraine war.

Ibrahim Sesay, a teacher in Freetown, told AFP: "We are poor, hungry.

"Salaries aren't enough to pay for food, clothing and utility bills for the house," he added.

Speaker Bagbin calls on Israeli counterpart in Jerusalem
45 minutes ago