The Menace Of Street Hawking 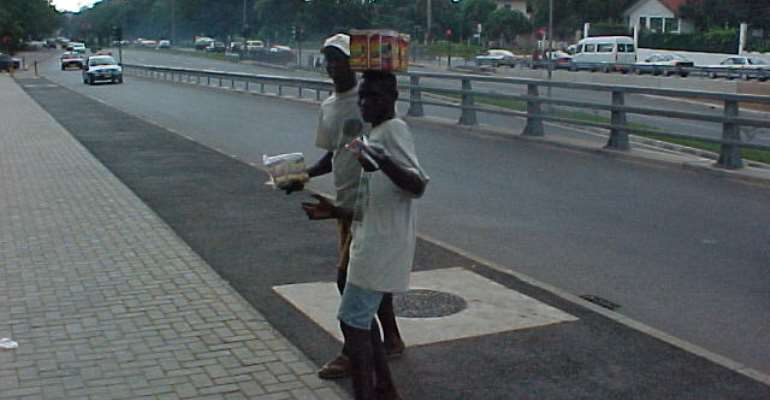 In a powerful article in the May 8, 2004 edition of the Daily Graphic, Professor Badu Akosa gave a detailed analysis of the annoying and dangerous phenomenon of young people literally taking over the streets of Accra, selling everything from fresh fruits to toilet paper to electronics.

There are also beggars, some of them walking on crutches, and others being led or pushed in wheel chairs by other people. Both beggars and hawkers risk their lives by going in and out of traffic. They typically congregate on busy streets at major intersections, and their activities impede the free flow of traffic.

I also added my voice to the chorus of pleas to the authorities to arrest the situation.In my article in the May 14, 2004 edition of the Daily Graphic, I concluded that I did not understand why the Accra Metropolitan Assembly (AMA) and the Ghana Police would allow this unsightly and dangerous practice to go on.

Many times when I am in traffic and observe a particularly annoying or dangerous scene, I ask myself the same question and conclude it is not worth complaining about because nothing is going to be done about it. But I decided to write this article as an appeal to the AMA, the Ministries of Local Government and the Interior, and the Ghana Police to stop this problem once and for all.

This article is prompted by three incidents I have experienced in the past few weeks. In the first incident, I entered Liberation Road from Patrice Lumumba Street around 6 p.m. when traffic was extremely heavy. I necessarily joined the inside lane of the three-lane Liberation Road on my way to the Spintex Road. To turn on to the Spintex Road, I had to cross the middle lane to get to the outer lane.

It was not easy to get to the middle and outer lanes because traffic was so heavy; and every time I had a little chance to move from the inside lane, I encountered hawkers who were lined up along the strips dividing the three lane. When I arrived at the Spintex Road junction at Tetteh Quarshie Circle, I was still in the inside lane.

I went around the complete circle before I got a clear shot to Spintex Road.I was quite upset that because of these hawkers I had to make an unnecessary trip around the big circle, wasting fuel and time in the process.A less careful driver might have forced his or her way on to the middle and outer lanes instead of going around the circle. But I did not want to take the risk of hitting a hawker or another vehicle.

In hindsight, couldn't I have encountered an accident I tried to avoid by going through heavy traffic around the circle? This incident was perhaps just a nuisance, but the next two were down right dangerous.In the second incident, I stopped at the intersection of Achimota Road and Kotobabi Road when the traffic light turned red.A woman, who seemed to have nothing physically wrong with her, approached the car with a child of about six to eight years old.I ignored the woman's plea for money, as I usually do.

The light turned green, and just when I took my foot off the breaks and was about to hit the accelerator, I happened to glance on my left, and to my shock, the little girl was holding on to the door handle of the car.I put my foot back on the breaks and called the woman's attention to the fact that she was endangering the child's life. "I beg; I beg," she responded.

I was horrified by this incident because if I had taken off suddenly without looking to see the girl, she would have been dragged by the car and killed. Secondly the incident happened on a Saturday when traffic was quite light. If traffic had been heavy, the car behind me might have hit mine because when I took my foot off the breaks, that driver could assume I was moving. I considered this a lucky break.

The third incident took place in heavy traffic at the traffic light in front of the 37 Military Hospital. A young man, who appeared to have flaccid paralysis and was walking on a pair of elbow crutches, was leaning against the car directly in front of me asking for money. When the traffic light turned green, the car took off, and the man tripped and fell as he hobbled hurriedly to get to the sidewalk.

I was watching him lean against the car and wondering why he was risking his life in heavy traffic.Therefore, my foot was still on the breaks when he fell, otherwise I might have hit him. Again, I was horrified and asked myself why hawkers and beggars are allowed to practise their trade on the streets.

I decided to write this article after the third incident by way of appealing to the authorities to do something to get these hawkers and beggars off the streets once and for all because they are endangering their lives and the lives of other road users.I understand some of the hawkers get hit by moving vehicles and some have even been killed, yet the practice is allowed to go.

Why? Personally, I would have great difficulty coping if I killed or permanently injured someone who was supposedly trying to make a living, hence my fervent appeal to the authorities to act now. Why can't the AMA and the Ghana Police get these people off the streets? Along Liberation Road and other major streets in Accra, there are big sign boards prohibiting hawking, yet the illegal activities go on with impunity.

Occasionally, one sees hawkers running away shouting Aaba ei!, which means "they (the police) are coming". As soon as the police go away, the hawkers return to the streets. If the authorities cannot get rid of the sellers for some reason, perhaps the buyers should be targeted.

My suggestion is that the Minister of the Interior should come out with a statement that selling or buying on the streets is illegal, as he did recently with regard to land guards.The same should apply to the begging for and giving of alms.

Then the police should be on major streets to target the buyers and alms givers with a spot fine of say ¢100,000. If the driver or passenger in a private vehicle buys from a hawker or gives alms on the street, the vehicle should be impounded until the fine is paid.

On commercial vehicles, the offending person should be made to come out and pay the fine while the vehicle goes on its way. When a few people get fined, people will stop buying and giving alms on the streets; and if no one is buying or giving alms, the street hawkers and beggars will all leave the streets.