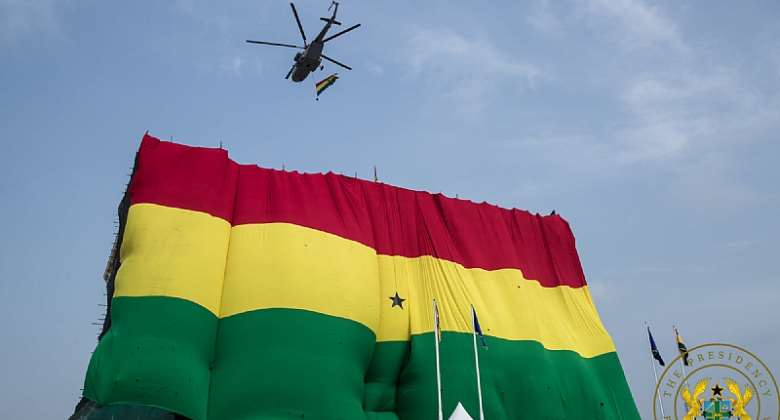 Today, 6th March 2022 marks the independence of Ghana from British colonial rule. Despite many challenges facing Ghana today, there is the need to appreciate and reflect on Ghana’s post-independence trajectory 65 years ago. On 6th March 1957, Ghana gained its independence. It was a hard long struggle to regain her dignity and attempt to control her own affairs. The struggle for independence started on the day the various colonial forces tried to take over the then component parts of Modern-Day Ghana. The Ancestors of Ghana fought gallant battles against slavery and eventual colonialisation.

There were the struggles led by the Aborigines Rights Protection Society (ARPS) and later the movement led by the United Gold Coast Convention (UGCC). These culminated in the formation of the Convention People’s Party (CPP), led by our Founding Father Osagyefo Dr. Kwame Nkrumah. Kwame Nkrumah and the CPP mobilized the people, especially the youth, market women and ordinary people across the country and accomplished the battle for political independence.

On 5th March 1957, Ghana took over the mantle to govern itself. Thereafter Kwame Nkrumah begun the second battle for the progress and wellbeing of Ghanaians towards economic independence. Kwame Nkrumah embarked on programmes that ensured that the economic needs of Ghanaians were met. That is why he set up import and export substitution industries which guaranteed that Ghana did not spend our scarce foreign currency on goods that we could produce locally. Agricultural production and animal husbandry were encouraged. There was free medical health care for the entire population. Education was expanded, free and compulsory across the country.

Apart from the economic programme that were undertaken by the Nkrumah government for Ghana to gain our economic independence, Nkrumah declared that: “The independence of Ghana was meaningless unless it was linked up to the total liberation of the African continent.” Nkrumah and the CPP were acutely aware that colonialism balkanised the African continent primarily for the economic gains of the colonisers and to the detriment of the Africans. Unless Africa was liberated and united, the struggle for our independence will be meaningless. That essentially necessitated the total support provided to the liberation movements across Africa and the rest of the world. Ghana became the Mecca for the oppressed across the world for their national liberation. Another feat of Nkrumah was that he sponsored and supported the Non-Aligned Movement that brought together countries across the world to ensure that we were not part of the hegemonic struggles that were raging between the United States and the former Soviet Union.

All these actions by Nkrumah and the CPP were definitely seen as threat to the emergent world power of the United States and its ally, the United Kingdom. It is therefore not surprising that the powers colluded with local reactionary forces and overthrew the progressive government of Dr. Kwame Nkrumah.

With the overthrow of Nkrumah and the CPP government, Ghana retreated to its neo-colonial status. Our extractive sector was given out to foreign capitalist interests for peanuts. Our import and export substitution industries were sold out cheaply to foreign bidders and those not considered viable were abandoned. People who were championing the course of liberation for their various countries who found shelter in Ghana were thrown back to their enemies. The Pan-African agenda was completely abandoned. Lt. Generals Akwasi Amankwa Afrifa and Emmanuel Kwasi Kotoka competed among themselves as to who serves best the interests of imperialism. Declassified information of the Central Intelligence Agency (CIA) has shown the extent to which the Americans, the British and Canadians worked assiduously with our local collaborators to abort the progressive government of Kwame Nkrumah.

The beginning of the slippery road of Ghana to poverty and immiseration had begun. Presently, Ghana's economic situation is so terrible that it is not an exaggeration to talk about what appears to be a looming collapse. The two major parties the New Patriotic Party (NPP) and National Democratic Congress (NDC) have maintained the economic and political system that renders majority of Ghanaians poor; provides substandard health care; implements colonial educational policies; supervises shameful homelessness and perpetuates unemployment especially among the youth. Workers are paid wages that barely put both body and soul together and sometimes payment of wages delay.

The industries are not viable despite the claims of “One District One Factory” and “One Village One Dam” policies of the NPP government. Thousands of our youth are going without jobs. The few jobs that are available go to the highest bidders – that is those who can pay the highest amount for these jobs or have political connections. The economic sector is weak and is the cause of the economic impoverishment currently being experienced.

The National Health Insurance Scheme (NHIS) does not insure anyone against serious sickness, and many sick people are hardly catered for. In Ghana you have to pray that you are not sick especially if you live in the rural areas. Major illnesses are not catered for. The educational system is in shambles magnified by the not well thought out free senior high school education policy. In today’s Ghana, the public education sector has nearly collapsed and there have been an expensive phenomenal growth of private sector. Everyone in Ghana struggles to send their children to private schools including teachers who teach in the public schools. This renders the much-touted free Senior High School education policy meaningless. Thousands of our children are locked out of quality education and it is only those who can afford who are able to send their children to expensive private schools. This situation builds up and aggravates the class system in the country and the consequences that it would eventually perpetrate on the already suffering masses.

Everything about Ghana's politics is for sale, sadly. Shadowy figures control and dominate the NPP and NDC. Even at the constituency level, people who want to serve their party in any position pay their members to elect them. This phenomenon is up to the national level. It is a common knowledge that huge amounts of money are paid out to assembly members to endorse nominated District and Municipal Chief Executives. How can a country be developed when its politics is dominated and controlled by those who have money and invest in these parties for their personal gain? What country are we building when politicians have become charity givers because they want votes from their constituents?

In fact, there is so much masquerading by leaders on how Ghana is doing well and more especially the rhetoric’s to the international community by our President, Nana Akufo Addo, that has misled non-Ghanaians to conclude that Ghana is doing well economically and politically.

On the day that we declared our political independence, we also call on progressive forces to declare a day in a year to remember all those who fought for social and economic justice for us and are no longer with us. We must remember patriots like the late Johnny Hansen, Emmanuel Hansen, Kwame Adjiman, Ashiboe Mensah and all those patriotic soldiers especially the other ranks who fought gallant battles against the Rawlings dictatorship which sustained the sale of our state-owned interests to private individuals thereby contributing to the collapse of our industrial sector.

Onward with the struggle for social and economic justice. We shall succeed at all cost.