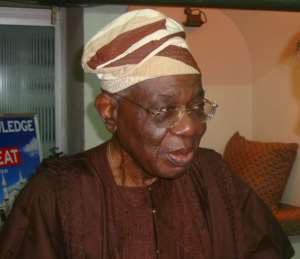 Ernest Adegunle Shonekan, who has died at the age of 85, was appointed Nigeria's interim president after the annulment of the June 12, 1993 Presidential elections. He served as Head of State of Nigeria for 83 days – from 26 August 1993 to 17 November 1993.

Shonekan became an unelected leader of the largest black democracy in the world neither through election nor a coup. The military government of General Ibrahim Babangida appointed him after a bungled transition effort to take the country from military to civilian rule.

In 1993 Nigeria had been through a tumultuous 33 years since independence from Britain in 1960 . This included a devastating civil war – the Biafran conflict – and a series of military coups. The country had also become one of the wealthiest on the continent following the discovery of vast oil reserves in 1956 at Oloibiri in the Niger Delta.

Shonekan had made an indelible impression on the then junta, led by Babangida, when he assumed the head of government affairs to supervise a smooth and peaceful electoral transition into a democracy.

The world and Nigerians were watching to see whether this democratic transition would succeed. The last that ushered President Shehu Shagari into power in 1979 had been tainted and controversial.

Shonekan was the first head of state in Nigeria to be appointed. His predecessors had assumed the post either after an election, or after a coup. Opinions are still divided as to his suitability and justification of his appointment.

Some Nigerians argued that he was a man with genuine intentions, citing this as the reason that he agreed to serve as interim leader. Others, however, describe him as a usurper who exploited his closeness with military leaders.

Despite these debates, he was nevertheless, in our view, a stabilising factor for the economy and Nigeria's peace.

While his time as the head of the Interim National Government was short, he said during his inauguration that he was committed to restoring peace and stability to the country.

Shonekan was born in Lagos on 9 May 1936, into a family of six children. Although from Abeokuta in south west Nigeria, he lived the early part of his life in Lagos.

He had his secondary education at the C.M.S. Grammar School in Lagos before attending the University of London where he earned a Bachelor's degree in Law. Shonekan also attended Harvard Business School.

He began his professional career at the United African Company. Originally a British company that traded in West Africa during the 20th century, it was formed in 1929. The company has grown into one of the largest African controlled groups on the continent and is listed on the Nigerian stock exchange as UAC PLC . It's involved in manufacturing, services, logistics and warehousing, agricultural and real estate.

Shonekan moved through the ranks of the company to become the chairman and chief executive in 1993.

But, in our view, it was neither his professional achievements nor his patriotism that landed him the job as head of state. Rather it was the fact that he came from Abeokuta. It was Shonekan's ethnic background and chieftaincy position that accounted for his appointment. He was viewed as a man who could steer the country away from more internecine conflict.

The reason for this was that Abeokuta is also the hometown of Chief Moshood Abiola, who, after the 1993 poll and its annulment by the military, had declared himself the winner. The annulment led to widespread unrest across the country . In particular, tensions mounted in the southwestern part of the country raising fears that Nigeria was headed for another civil war.

Shonekan's appointment was a way to show that there was no political marginalisation of the Yoruba people to which he and Abiola belonged.

There was, nevertheless, a great deal of scepticism to his appointment. Despite this he forged ahead, meeting with different segments of the country.

But Shonekan was unable to exert authority. He was unable to create an excellent democratic transitioning plan, which was the primary purpose of his tenure. This could have been because of distractions like strike actions by labour unions and the persistent protests. There was also a general indifference by citizens towards him and his government. This is because many felt he had no business heading a troubled Nigeria through the decree of a military junta responsible for the same mess he was asked to clear.

His attempts to lobby for debt cancellation were rebuffed by Western countries because of the elections annulment. Shonekan's timetable for troops' withdrawal from the Economic Community of West African States Monitoring Group was also jettisoned as he was not in full control of the armed forces.

He was truly a lame duck leader and difficult to remember him for any notable achievement in office.

It must be said that this was due in large part to the fact that the government he ran was powerless. So powerless in fact that he was ousted easily by General Sani Abacha, the defence minister. There were no protests or murmurs anywhere.

After his ouster, with other business people he started the Nigerian Economic Summit Group in 1993. It was conceived as a platform for bringing together private sector leaders and senior public sector officials to discuss and dialogue on the future of the Nigerian Economy.

It holds a yearly summit which provides government and private sector an opportunity to review the progress made in economic reform efforts. The summits also deliberate on practical ways to manage issues which may have constrained effective policy implementation. The 27th edition of the summit was held in 2021.

It is fitting that his enduring legacy is in the business world and not the political arena where he remains a footnote in Nigeria's history.

‘You got it all wrong’ – Chamber of Freight & Trade criticis...
36 minutes ago