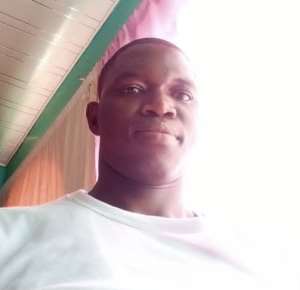 1.The Wa Municipal Hospital since the beginning of last year, has been on a positive trajectory in clinical care. At least it has not been in the news for "bad reasons" lately.

2.I was shocked to read on "Upper West media" the news item captured in the screenshots below and I went digging to establish the veracity or otherwise of the report shown to be filed by Tahiru Lukman (I do not know whether he is a journalist or a blogger).

3. I am going to walk you through the issues surrounding this story of Mr. Mathew Braimah, the person involved in this issue and you can judge with your own mind.

4.I confidently state; Mr Mathew Braimah lied blatantly to the public. There was no assault on his person. There was no attempt to assault him at all. Here are the facts of the incidence.

5.Mr Mathew Braimah was admitted on 27th December,2021. He appeared to the ward alone . Nurses who were on duty duly received him and offered him a bed.

6.They picked infusions stocked in the ward and set up on him as his prescribed medications were not yet collected. This is an emergency measure that exists in the department.

7. When his medications were collected; the infusions that were picked from the emergency stock were not replaced immediately.

8. Mr Mathew Braimah during ward rounds on 28th December,2021 was discharged duly by the prescriber on duty after he himself had stated he was fit to go home.

10. When his discharge documents were rightfully signed, he was informed of his bill. He attempted to pick quarrel with the nurses and they professionally ignored his "provocative talks".

11. After a while he agreed and went and paid his bill and then his discharge oral medications were taken from the dispensary. When he submitted the receipts to the nurses; his discharge process was completed.

12. When all this was done; Mr Mathew told the nurses he wanted to carry the rest of the infusions to his house. Note that he was given some infusions that were not replaced.

13. Again, per NHIS and Hospital protocol nurses are not allowed to give out infusions as part of discharge medications. As far as they were not used and not documented if a patient takes them home the hospital and the NHIS loses the infusions.

14. This means Mr Mathew was completely acting against the protocol of the service as regarding the operation of NHIS. Fact is,he did NOT buy those infusions he was laying claims on.

15. Nurses in the department have stated categorically there was no such thing as assault and I believe them because this is not the first time Mr Mathew has created such a situation with clear ignorance of the system.

16. Granted he was ignorant, even when the nurses referred him to the hospital administration for further explanation as to why he had no right to send the infusions home. Did he comply? Why did he not wait to clarify ?

17. A third person ( referred to in their bizzare story as Alhaji) was called in. As a matter of fact; the gentleman in question is one of the most important persons who advocates for patients. He cannot be the one fighting any patient and certainly not Mr Mathew Braimah.

18. He is a member of the dispensary department and part of their job is to go round and collect unused medications/infusions from the various in-patient wards so they can be appropriately distributed to patients who need them. This is why he was called to the ward.

20. Mr Mathew Braimah was the one that actually shoved him and after he failed to out- muscle him,he decided to go out and create the fuss that he was beaten and given " blows" . I can't imagine what would prompt someone to lie this way. Mr Mathew should show us the proof of the blows.

21. Now to Mr Lukman Tahiru, I do not know whether you were trained as a journalist. Your basic professional ethos should remind you, it is not every hearsay that is published.

22. If you do not know any ethos of journalism; the common one is that "when someone tells you it is raining, yours is not to just agree, yours is to open your window and look at the fucking rain" to confirm it.

24. Mr Tahiru Lukman, you should have known that the Wa Municipal Hospital is an institution with structures. When the incident got to you, you could at least follow the basic ethic of journalism by finding out whether such a thing occurred before writing a disjointed and fabricated story of assault. Next time let your profession lead you. If you have any iota of facts write to counter the facts stated here.

25. We cannot continue to lie and denigrate institutions in the Upper West Region in the name of "I know my right" when some of these acts are ignorantly carried out. We must allow the institutions work and stop some of these needless and cheap publications.

26. The Wa Municipal Hospital is improving every blessed day. I appeal to all who need medical services in the region to continue to visit accordingly. The public need support the management of the hospital and continue to criticize to improve and not to damage.