I Went to Ethiopia Representing the TRUE Interests of the U.S.A. 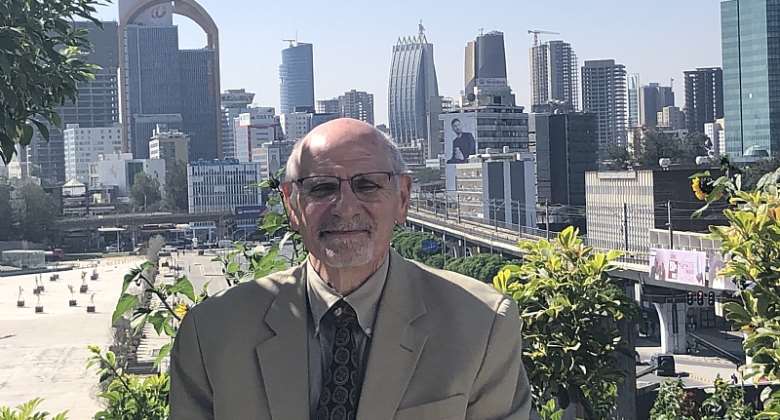 Lawrence Freeman standing in front of the Addis Ababa skyline

Why I Came to Ethiopia

I was on the ground in Addis Ababa, from November 28 – December 10, to defend Ethiopia and represent the true interests of the United States. During that time in Addis, I conducted sixteen interviews and gave a two hour lecture at Addis Ababa University. I came to Ethiopia as an American, who, knowledgeable of the origins of my country, knows that the current U.S. policy towards Ethiopia is wrong and dangerous.

Understanding the intent of the psychological warfare campaign conducted by Western nations, international media, and most especially, my own United States Department of State, I knew the most important place for me to be, was in Addis Ababa, the capital of Ethiopia.

As I anticipated, all was calm and normal in this bustling city, with unending construction of new buildings. Through multiple media outlets I was able to expose the lies of the false narrative about Ethiopia and counter the psychological warfare campaign being waged against the Ethiopian people.

It was and remains my responsibility to defeat this campaign against Ethiopia and present what America’s true interest are in Africa.

Discussion with Laurence Freeman on Ethiopia, Africa and the West

The U.S. embassy sent out daily disinformation that Addis was in danger of attack from the Tigray People’s Liberation Front (TPLF) located in the town of Dessie, less than two hundred miles north of the city. Even after government forces pushed the TPLF out of Dessie, the U.S. embassy continued to encourage Americans to leave Addis and went as far as offering to buy their tickets to return home. Ned Price, press spokesperson for the U.S. State Department, attempted to create even more fear and hysteria, by officially announcing the U.S. would not be conducting a military airlift for Americans like it did in Afghanistan this past August.

Various news programs accompanied the State Department’s fraudulent comparison of Addis and Kabul with videos of an American plane taking off from the Kabul airport leaving desperate people behind on the runway. This disgusting and outrageous comparison between Addis and Kabul, was deliberately and knowingly untruthful.

Those who believe the U.S. has not taken “sides” do not comprehend political warfare. And do not understand the intent of geo-political forces in the administration of President Biden and other western governments for regime change of the duly elected Prime Minister, Dr. Abiy Ahmed.

Relaxing at a restaurant off Meskel Square, Addis Ababa

More ominously for Ethiopia than Ned Price, the New York Times, the premiere organ of the U.S. Establishment, articulated the geo-political intent for regime change. In a blatant “hit job,” advocating the necessity of removing the “sinister” Prime Minister Abiy at all costs, The Times published on December 15, The Nobel Peace Prize That Paved the Way for War . This article maliciously portrays Prime Minister Abiy as a maniacal ruthless leader only bent on destroying the TPLF and caring nothing for Ethiopia. Its intent should obliterate any ambiguity regarding U.S. geo-political policy for Ethiopia.

It is vital for the Ethiopian government, its people, Ethiopian diaspora, and friends and allies, to understand the geo-political determination to weaken the authority of Prime Minister Abiy or remove him from office. However, simultaneously it is necessary to think beyond the current military campaign. The government should prepare now for what is required as soon as this conflict is over. It is imperative for the future of the nation that Ethiopia engage in two crucial missions:

America was not created to intervene against sovereign nations like Ethiopia. Today, we are still witnessing the death and destruction across the Sahel caused by President Obama’s military intervention ten years ago when the U.S. overthrew and killed Libya’s leader, Muammar Gaddafi.

There is no objective reason for discord between the U.S. and Ethiopia. None! The conflict between the two nations exists entirely because President Biden has allowed his policy towards Ethiopia to be determined by the globalist-humanitarian-democracy cabal. They arrogantly believe they have the right to impose their so-called democratic-humanitarian construct on Ethiopia. Dictating how Ethiopia should be governed, and who should govern it.

The United States, created to be a Democratic-Republic, was founded on the economic theories of Alexander Hamilton, endorsed by President George Washington. These principles, known as the American System of Political Economy, have guided our more thoughtful U.S. presidents in conducting foreign and domestic policy.

The U.S. in its better moments, unlike the last few decades, has supported the right of governments to preserve the sovereignty of their nation. President Abraham Lincoln was prepared to continue the war, which costs the lives of 750,000 Americans, to defeat the efforts by the southern Confederacy to break up the Union. For President Lincoln, there was no greater importance than safeguarding the sovereign Union of the U.S., and no limit to his actions for that purpose.

The author giving a lecture at Addis Ababa University

As a result of Hamilton’s dominant influence, the U.S. was committed to economic development from its very inception and desired the same for all other nations. Sadly, the last U.S. president who understood the critical importance of economic development for African nations was President Kennedy–almost sixty years ago. To the detriment of the U.S. and the world, America has lost its mission and its vision to create a better future for humankind. The shining “city on the hill” has become a quite a bit dimmer.

The true underlying interests of the U.S. and the American people is exactly the same as that of Ethiopia and its people. All nations have the same shared-common goals:

The foundation of a real American foreign policy should rest on these two pillars of statecraft. From this higher strategic perspective, Ethiopia, and the U.S., have no fundamental insurmountable disagreements that would prevent the two nations from engaging in policies that will mutually benefit its people now and for the future.