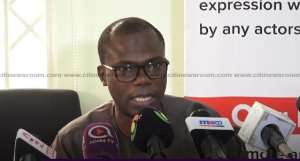 The Media Foundation for West Africa (MFWA) has called on the Ghana Police Service to exercise restraint on how it reacts to content put out by media.

The comment by the Foundation follows the arrest of the host of Onua TV/FM’s morning show in Accra.

A statement from the Ghana Police Service said he was arrested for making “some unsavoury pronouncements that hinge on peace and security”.

The action of the police has been condemned by the Media General Group, owners of Onua TV/FM, who say the comments made by Captain Smart, do not in any way threaten Ghana's peace and security.

Executive Director of the Media Foundation for West Africa, Sulemana Braimah, spoke to Citi News on the latest development.

“I will at all times urge restraint when it comes to Security personnel taking certain actions in relation to the content that is put out in the media, unless it is something that puts the life of the other people in danger. Otherwise, it creates an impression as though, security personnel are used to stifling freedom of expression.”

Mr. Braimah also cautioned media practitioners to be measured in their quest to demand accountability from leaders.

“I don’t think that the media’s constitutional mandate of holding government accountable includes talking about parliamentarians and uprising. Sometimes the quest to either get cheap popularity or mobilize a certain captive audience in order to get a large following for our media organization because of the current competition we are in makes us do certain things that are completely overboard. I will like Media General to say that, they appreciate the issue and that they will look into it. But for them to brush it apart as if they endorse what has happened, is disappointing,” he added.

Captain Smart has been cautioned on the offence of offensive conduct conducive to breaches of the peace as provided under section 2017 of the Criminal Act, 1960 (Act 29), according to a statement from the Ghana Police Service.

Meanwhile, the Media General Group, owners of Onua TV/FM, says recent comments made by Captain Smart, its morning show host, that warranted his arrest, do not threaten Ghana's peace and security.

In a press statement issued on Thursday, December 2, 2021, and signed by its Group Head of Corporate Affairs, Christopher Koney, it rejected the claims by the police.

According to the group, police misinterpreted the comments by Captain Smart .

“Media General believes that the statement made by Captain Smart should not be one that should be interpreted in the manner that the Police did, and also to add that we are increasingly concerned about the new trend of the arrest of journalists and media practitioners.”

The statement added that Captain Smart's arrest is not just an isolated incident, but an example of the intolerance increasingly creeping into Ghanaian society.