Turkey And Bangladesh Can Benefit from Growing Trade and Strategic Ties 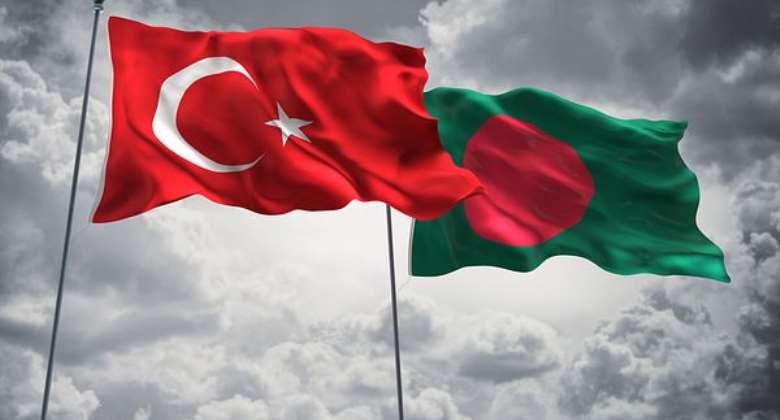 Turkey is a real well-wisher and good friend of Bangladesh. It is Turkey that was, is, and will be with Bangladesh in the crisis moment. Only the sky is the limit of Turkey-Bangladesh ties. According to recent reports of Bangladeshi media outlets, Bangladesh In recent times, Bangladesh and Turkey have become increasingly close, with two main goals behind them. On the one hand, Turkey's far-reaching efforts to regain its influence in the Muslim world. On the other hand, Bangladesh is willing to expand trade and defense ties including resolving the Rohingya crisis. Based on these two goals, analysts in Dhaka believe that the relations between the two countries are going to reach a 'unique height'.

Turkey, a member of the NATO alliance, has a strong position in international forums, including the United Nations and the OIC, they say. Despite the distance from the country in the past, the relationship was strengthened by supporting Bangladesh on the Rohingya issue. After that, Dhaka focused on increasing trade relations with Ankara, and the response was as expected. At present, bilateral trade between Bangladesh and Turkey is 1 billion annually, but efforts are being made to increase it to 2 billion. With the increase in defense cooperation, bilateral relations are expected to deepen.

Now turkey wants to invest more in Bangladesh. Bangladesh and Turkey agreed to boost up trade, tourism. Turkey has been able to attract the attention of the world as it has made tremendous progress in the last decade. On the contrary, Bangladesh has emerged as a country of new potential for economic growth. These two issues are playing a role in strengthening mutual unity and relations between the two countries.

Bangladesh has condemned a coup attempt against Turkish President Recep Tayyip Erdogan in 2016. According to a letter from Prime Minister Sheikh Hasina, relations between the two countries are warming up. From time to time, Erdogan's administration has been expressing support for Dhaka on the Rohingya issue.

Later, Turkish First Lady Emin Erdogan came to Bangladesh to visit the Rohingya camp in Cox's Bazar. Turkey has taken a strong stand in support of the Rohingya on the world stage, including the UN-OIC. The country has taken a number of steps, including providing humanitarian assistance. As these are practically in favor of Bangladesh, Dhaka benefits in other areas including diplomacy.

As a result, the Chief of Air Staff and Navy will visit Turkey in late 2020. Foreign Minister AK Abdul Momen went to Ankara, Turkish Foreign Minister Mevlüt Çavuşoğlu came to Dhaka. They inaugurated their embassies in the two countries as well as signed bilateral agreements.

Turkey is very interested to build a sustainable strategic and defense ties with Bangladesh. Bangladesh has also agreed to buy military equipment from Turkey to strengthen the country's security system. In the coming days, the two governments will hold talks with Turkey on joint production of military equipment in the country and extensive training in the security sector between the two countries. The defense cooperation between Dhaka and Ankara had been increasing for the last couple of years in view of Turkey’s near self-sufficiency in defense manufacturing.

Experts say the development of defense ties between the two countries is positive, adding a new dimension to the relationship. In the future, the relationship between the two countries may become even stronger. In FY2019-20 total trade with Turkey was $686.41 million out of which Bangladesh’s export was $453 million against the import of $233.41 million reflecting a positive trade balance of $220.06 million in favour of Bangladesh. Infrastructure, construction materials, railway, renewable energy, automobile, healthcare, medical equipment, shipbuilding, agriculture, home appliances etc. are some of the potential areas for Turkish investment in Bangladesh.

Turkey is working on increasing the trade volume with Bangladesh to the tune of $3 billion in the next few years, now that it has crossed the $1 billion-mark. Turkish Ambassador in Dhaka Mustafa Osman Turan said this while speaking with diplomatic correspondents at the new Turkish embassy in the capital on November 24, 2021. Trade potential between the two countries needs to be tapped to increase the trade volume to $3 billion, said the Turkish envoy. Bangladesh was Turkey's second-biggest trade partner in South Asia after India, with a total trade volume of $1.2 billion, Bangladesh was the fourth biggest buyer of Turkish defense products. In FY2020-21 Bangladesh’s export to Turkey was $499.79 million, Turkey’s “Asia Anew” initiative, Bangladesh can be a key focus of Turkey for trade and investment.

According to the Bangladesh Mission in Ankara, Turkey, a new agreement was signed between the two countries in the defense sector on June 29. On 29 June 2021, the Government to Government (G2G) defense memorandum of understanding (MoU) was signed between Bangladesh and Turkey . According to the agreement, Bangladesh will buy a significant amount of military equipment from Turkey. The agreement was attended by Bangladesh Ambassador to Turkey Musad Mannan and Defense Attache Brigadier General Rashed Iqbal.

According to various media outlets, Diplomatic sources say Bangladesh wants to have multiple sources of military equipment in the context of ongoing geopolitical changes. As part of this, this agreement has been signed with Turkey. There are plans to sign the agreement with several other countries in the coming days.

Turkish Foreign Minister Mevlüt Çavuşoğlu told reporters in Dhaka at the time that Bangladesh was now the rising star of Asia. Bangladesh is one of the important partners of Turkey in Asia policy. The progress that Bangladesh has made in the economic sector in a very short period of time is commendable. The big businessmen of Turkey want to take the opportunity to invest in different sectors of Bangladesh.

In the military sector, Turkey can produce to fulfill its own needs, which is standard and sustainable. Turkey wants to cooperate with Bangladesh in this sector. Turkey is interested in technology exchange and joint production in this sector if necessary.

Bangladesh and Turkey both need to make progress with each other in the defense sector. Many foreign partners in Bangladesh will not be happy. But Bangladesh needs to move forward with Turkey to keep them happy. "Turkey is the only country Bangladesh can count on that can come forward in times of crisis."

Turkey has already called on Bangladesh to jointly participate in the production and development of military equipment. Turkey is advancing a lot in drone technology. Drone weapons will play a very important role in the coming war situation. The situation may be such that the drone will hover and it will be controlled sitting in the office. Even 21 years ago, they were building an armed personal carrier, that's when they built a small plane. There is no doubt that they will build fighter jets at some point. '