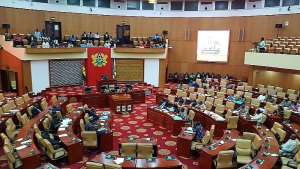 The National Democratic Congress (NDC) has commended the Minority Caucus in Parliament for rejecting the 2022 Budget Statement and Economic Policy.

The NDC in a statement said the Minority Caucus comprising 137 MPs failed to approve a budget that would have worsened the economic challenges Ghanaians are already battling with.

“The party salutes the courage and patriotism that was displayed by the Minority Caucus Leadership and all 137 NDC members of Parliament who chose to stand for the people of Ghana and refuse to be part of the further imposition of hardships on the already-burdened Ghanaian people, as the Akufo-Addo/Bawumia/NPP government sought to do through this rather unpopular 2022 Budget,” the party said.

The 2022 Budget Statement and Economic Policy was rejected after the majority staged a walkout in Parliament on Friday, November 26, 2021.

Parliament had through a voice vote rejected a request by the Minister of Finance, Ken Ofori-Atta, to meet the leadership of the House before the approval of the 2022 budget on the last day of the debate on the budget.

Deputy Majority Leader, Alexander Afenyo-Markin, challenged the Speaker's interpretation of the voice vote and called for a 'division'.

Mr. Bagbin thus directed that, per orders of the House, non-MPs had to vacate the Chamber during the division process.

While vacating the Chamber, the Majority MPs demanded that the General Secretary of the opposition National Democratic Congress, Johnson Asiedu Nketiah, who was sitting in the public gallery at the time, must also exit the House. He ignored this request.

This infuriated the Majority MPs, who walked out of the Chamber , leaving only members on the Minority side.