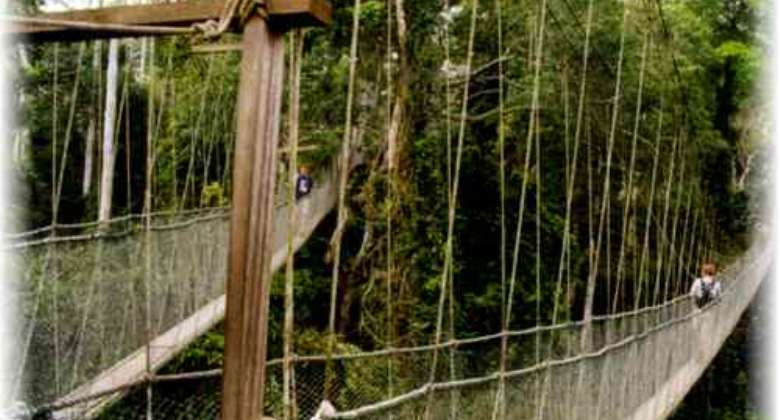 Tourism as a subject has inspired a lot of intellectual debate among analysts interested in tourism. There are three platforms for tourism debate. The first is that of “advocacy platform” those who are concerned about the maximizing the economic benefits of tourism, they even emphasize the potential of tourism to preserve natural and cultural heritage and to promote international understanding. This perspective is shared by both businesses that profit from tourism as well as governments that are seeking tax revenues, economic diversification, foreign exchange and job creation. In Ghana for instance, the Kakum forest was to be given out as timber concessions to lumber contractors but the then Central regional Minister Ato Austin, who was visionary, intervened with the argument that the forest cannot and be sacrificed. So as an alternative means of raising income for the villages dotted around the forest, he proposed the creation of ecotourism projects. Government agreed and a comprehensive plan was designed and executed in some of the villages dotted around the forest.

Today, Kakum Park is a master piece which is attracting visitors from all over the World. One of the World’s only three tree top canopy walkways hangs over a portion of the forest attracting thousands of visitors annually. It is one of Ghana’s most visited attractions. The forest is still intact, and Villagers are happy with their income generating ventures such as livestock production, craft and entertainment. There is the bamboo orchestra. (A group which uses only bamboo to produce very rich authentic music) The demand for the group to perform at various places across the Country is so much of significance that they have suddenly become one of the most important cultural dance groups in Ghana.

The CAMPFIRE project in Zimbabwe is another classic case of protecting the environment and yet earning income from it. A well managed ecotourism project can ensure that, the rate of environmental destruction is so minimal that the idea of giving up forests for mineral and timber exploitation is nonsensical. This makes the “advocacy” argument that tourism can also be used to protect environment and culture while maximizing economic benefits sensible. Locals would always tap food and medicinal herbs from the forest whether it is protected or not and if that is not controlled would lead to gradual destruction.

The second group, who do not share in the benefits of tourism describe tourism as a “blight rather than a blessing” This is the “cautionary platform”. They emphasize the negative social and environmental impacts of tourism and down play the economic benefits. They too have a case. But l always never want to discuss some negative impacts because what some social scientists, claim locals in destination areas copy from tourists are rather copied from Western television networks and films. Even before tourists start flocking in so that argument raises eyebrows.

In Ghana for instance, wearing of hot skirts (mini skirts) was not very popular until a western soap opera series titled “ Acapolco Bay was telecast on our network, then boooomm ! Hot skirts became fashion now our women dress semi naked in our streets, a non African habit copied from the West.

Every human activity has its negative aspects and tourism l admit, cannot be exempted.

Culture is very dynamic so it sometimes accommodates the influence of other cultures which it may come into contact with through several other media other than tourism as mentioned above.

There is however a third group which is attempting to find a compromise between the advocacy and the cautionary platforms. This group believes that tourism may create problems in some circumstances but that, appropriate forms of tourism development are possible.

Appropriate tourism development balances the demand of tourists, the need and values of host communities, environmental constraints and the goals of business. This concern has given rise to terms such as alternative tourism, sustainable tourism, ecotourism, green tourism, and community-based tourism. As l stated earlier, no human activity is without blemish that is why we have to plan tourism just like any other important human endeavor to at least minimize its negative effects on our cultures and environments.

We can never stop tourism neither can we deny poor communities their rights to benefit economically from their God given environments. If we decide they cannot farm on the land for fear of degrading the forests, then alternative means of income generation has to be created and ecotourism, which is an appropriate form of tourism, must be encouraged as the only way forward. Views expressed by the author(s) do not necessarily reflect those of GhanaHomePage.