Away from the world, the mangrove fishers of DR Congo 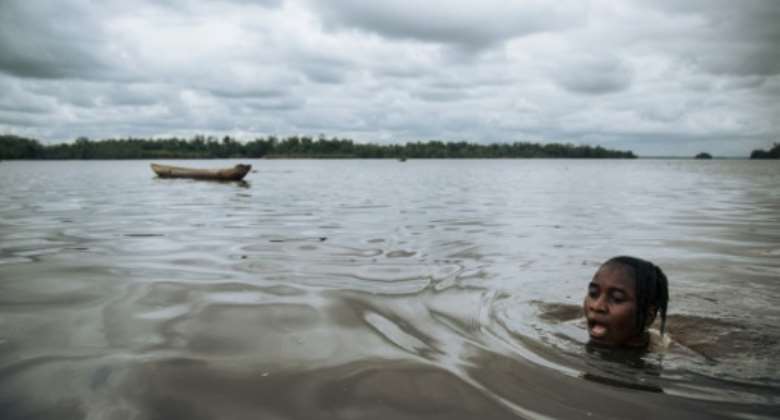 A clam fisher surfaces after diving without equipment to the bottom of the mangrove, several metres (around 10 feet) deep. By ALEXIS HUGUET (AFP)

They break through the surface of the water, noisily expel their lingering breath, then take another gulp of air before descending to the depths of the mangroves.

Buried in mud several metres (around 10 feet) below the surface is their prize: Clams known as bibwati, which are both a delicacy and a lifeline.

The park is a rare case of conservation -- in many countries, mangroves are ripped up to make way for shrimp farms or hotels. By ALEXIS HUGUET (AFP)

The men and women divers are members of the Assolongo tribe -- the only community authorised to live in the Democratic Republic Congo's Mangroves National Park.

The 768-square-kilometre (296-square-mile) park is a rare jewel of conservation in a world where mangroves are routinely destroyed for tourism or seafood farms.

A clam fisher boils up his catch. By ALEXIS HUGUET (AFP)

It lies on the mouth of the mighty Congo, where unique species of trees and shellfish thrive in the confluence of fresh and salt water.

The village of Nteva is reached after a boat trip through a labyrinthine semi-submerged forest covering nearly 20,000 hectares (50,000 acres).

The shoreline of Nteva village is a beach of clam shells, which become the foundations for homes. By ALEXIS HUGUET (AFP)

"We don't have electricity here, there's virtually no phone network, and no school either," village chief Mbulu Nzabi said.

The villagers hand-fish for bibwati and -- almost literally -- live on them.

The clams are boiled and their flesh taken for food. The shells are then thrown onto the river bank, joining a pile of remains that become the foundations for homes.

DR Congo is sub-Saharan Africa's biggest country, with an area the size of continental western Europe. By (AFP)

"Our grandparents built their huts several dozen metres (yards) from where we are today," said Nzabi.

"We are living on a huge pile of bibwati shells that is growing all the time."

The park and its precious ecosystem are overseen by the Congolese Institute for the Conservation of Nature (ICCN). It has an annual budget for the park of less than $100,000 (85,000 euros).

'Bakery Island,' where the waters of the Congo mingle with the Atlantic. Only members of the Assolongo tribe are allowed to live in the mangrove park. By ALEXIS HUGUET (AFP)

"Before there was the park, you could do anything you like," said Nzabi, a touch nostalgically.

"People could fish for manatees and sell their meat. You could cut down mangrove trees and make charcoal. Everything these days is regulated."

If the lifestyle in Nteva seems light-years from the rest of the world, daily reminders of the 21st century pass by every day.

Huge container ships, carrying Chinese products, frozen foods and many other goods, haul their way up the Congo to the ports of Matadi and Boma -- the trading gateway to the DRC's bustling capital, Kinshasa.

Night falls on Nteva village as a fisherman returns to his home. By ALEXIS HUGUET (AFP)

When night falls in Nteva, there is no television, nor is there the sound of rumba, the musical backdrop to life in the city.

Instead, the silence of the mangroves is broken by hymns sung in the Kissolongo language.

They are sung by a choir of women and girl choristers, gathered at a Catholic chapel made from raffia palms.