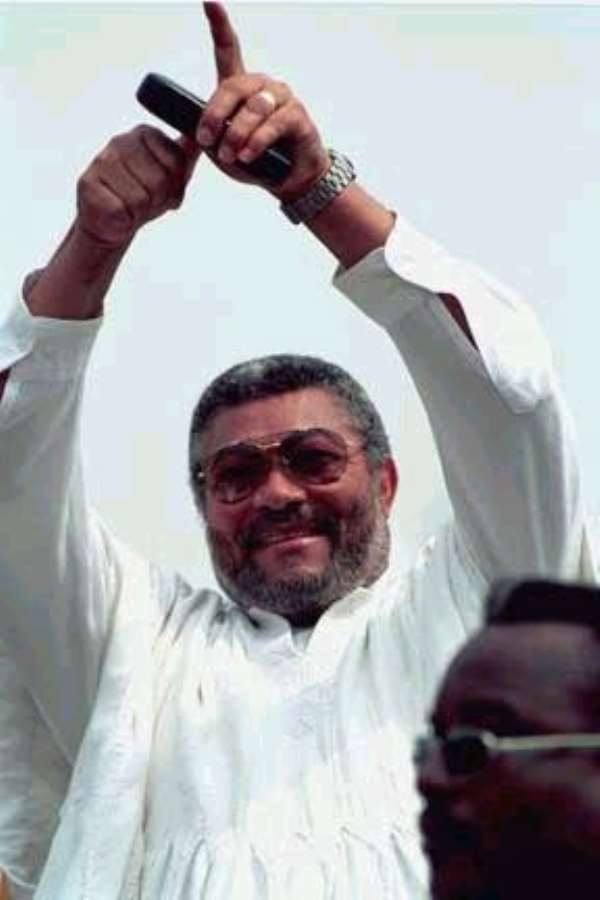 Junior Jesus is a satirist's dream. As soon as the man opens his mouth, the verbal delectables, delivered in his patented inchoate, but defiant style, and accompanied by the bravado of a has been, become fodder for this scribbler's imagination. Recently the inventor of 'boom'. was plying his trade under the watchful eyes of Obuatabiri, in Koforidua, where I grew up in the foothills, under the haze of human excrement, from the two public latrines that separated my house from the King's palace on the one side, and the Department of Social Welfare on the other. Jerry was in the neighborhood to campaign for Prof Mills, an NDC presidential aspirant. Today the one latrine has been demolished, but the smell from the other amply compensates for the loss, and spreads intoxicating fumes over the neighborhood to the Parish Hall where Junior Jesus fell under its sway and prophesied thus. JJ says that the Kuffour government has, within a year, committed the 'mistakes' of twenty years of (P)NDC rule. Now I shudder to imagine any government capable of duplicating Mr. Rawlings record, let alone within a one-year period. But people have divergent views about 'mistakes'. The socialists call mistakes 'experience', and since at one point, Junior thought he was Marxist, our magnanimity only leads us to think that he meant that in one year the Kuffour government had committed the same 'experiences' as twenty years of PNDC rule. You see, those excrement fumes around the Parish Hall can make things quite confusing.

But these days there is a hint of desperation in the mutterings of Junior Jesus. It is the Kwesi Botchwey thing. Kwesi seems to be loaded with some money and is paying NDC salaries left and right, and winning fans that threaten the anointment of Prof. Mills. The palpable prospect that a Kwesi Botchwey presidency could lead to the former backhanded minister becoming a possible issuer of backhand slaps must make Jerry quite nervous. In his desperation, and possibly as a result of the huge Catholic Church that looms over the Parish Hall, Jerry makes some telling revelations about human nature in the PNDC regime.

About Prof Mills, the tax lawyer, who seems to have nothing to say, Jerry says he is 'courageous, truthful, hardworking and brave man'. This, by implication, means Kwesi is timid, a liar, lazy and a coward. And as he rightly says, `he` should know them better. And as `we` rightly know, he kept this timid, lying coward as Finance minister for about 15 years. "Hmmm! Nsem na eyiyi bayi"?

The backhanded could become the backhander! The slapped, the slapper!

Desperation breeds confusion and when religion, hand in hand with the smell of human excrement walks the earth abroad, the results can be devastating. So it was, again, at the Parish Hall, Junior Jesus delivered his contradictory theses on Bribery. First his Erstwhile Excellency condemns Kwesi Botchwey's alleged bribing of opponents to staging a coup d'etat, both of which he calls 'wrong'. For a man who has been the architect of two coup'd'etats, such self-recrimination is quite disenchanting. And so we are forced to go back to our Marxist interpretation of 'mistakes', or in this case 'wrong'. They mean the same thing, right? What Junior meant to say was that, bribes and coup d'etats are 'experiences'. We know this because in the same breadth he advises the supporters of Mills to take the bribes offered by Kwesi Botchwey's supporters, because, according to him, Kwesi's newfound wealth is really 'party money' and belongs to them all?

How does Jerry know this? And we thought Kwesi's money was from his Harvard paycheck! Fair is foul and foul is fair. The backhanded may yet become the backhander!

In many ways, Junior Jesus is the very antithesis of Forest Gump, the hero of the Oscar award-winning movie with the same title. Gump is regarded by all as a complete moron and an imbecile, but in reality, as he traipses through life, his success and humanism far surpass all of humanity. He becomes a decorated war hero and represents his country in table tennis. From rags, he rises to become millionaire investor with Apple Computers and possesses an unquestionable love and loyalty that ask for nothing in return.

JJ on the other hand, is the one that all thought was the Redeemer after the iniquities of the Acheampong-Akuffo and Liman regimes. Like Gump, he had risen from rags to riches, and accumulated a lot of laurels on the way. He is the longest serving Ghanaian head of state; he has received two honorary doctorate degrees; he is a UN ambassador of goodwill; and yet he is a total moron who deserves nothing except the anonymity of history`s garbage heap. I was once witness to vintage JJ, cigarette pack in his socks, at the 1982 NUGS conference in Cape Coast University. For one whole hour, JJ delivered a monologue, whilst smooching the mike, without as much as one coherent thought in the whole delivery. But after he finished, he received a standing ovation from the admiring students,

Fair is foul and foul is fair! And we must `hover through the fog and filthy air`.

But here in this world, "in this bank and shoal of time" we are always rewarded with our just desserts, and it is no wonder that for all his troubles, the Farmers Association of one of the poorest nations of the world, the hapless Burkina Faso, has invited him for their National Farmers Day in recognition of his contribution to Ghanaian agriculture! Makes you wonder if the Burkinabe are aware that, under JJ, more food was imported into Ghana than at any other time.

To other news. Poor Kwesi Nduom! After only two years on the job, his dreams of ministerial splendour have been shattered, and he has come to the realization that 'being a minister is not as pleasant as some may see it". After months of globe trotting, traveling the seven seas and combing the regions, the best he could produce as a national vision is one that by his own admission is a combination of the best from all the failed visions of the past. No wonder his job is not 'pleasant'. Any first year university economics student could have compiled such a document without traveling a foot from his computer. But we shall give him the benefit of the doubt and wait for his 'visions'.

Finally, did you hear that the former Legon worker, who rose froomn the parched mud to become the deputy Finance Minister, and then thought he could computerize Ghana's court system, a delusion that landed him in jail for fraud, has now turned English Teacher at the Nsawam jails? Now that his turgid belly is fast reducing in size, Mr Selormey says that, had he known that prison conditions were that bad, he would have allocated more money to the prison service when he was Deputy Minister of Finance. Maybe he would have computerized it too.

So in these dog days, as the blind lead the blind, and the good and the bad are confused, and fair becomes foul, and foul becomes fair, we can only watch, and fervently pray.