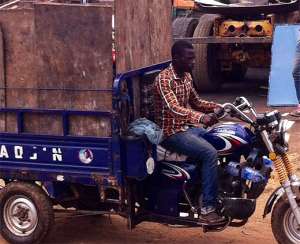 It was a retrograde move to have introduced the aboboyaa family of tricycle means of transportation after all the progress the motherland had made in moving people and goods over distances up to January 7, 2009. Inserted between two-legged bicycle/motorcycle pair and four-legged automobile, it's clear no careful thinking went into importing those three legged types of transportation machines.

Of course, there had been the Abossey Okai macho before. But adding the tri-legged has exacerbated the frustrating slowdown effect of those vehicles for long distance Kumasi and beyond drivers. Those drivers heading towards Accra on the highway, especially the Apedwa-Nsawam stretch, see torture in accommodating the aboboyaa.

In a broader sense, the introduction of the aboboyaa and its types has unwittingly taken the motherland back to the transportation mess she found herself in during the dark days of 1982-1993. Everyone remembers how Harry Sawyerr, before he became a villain in a dictatorship, was successfully revamping the public transport system under President Limann. The sector had been emaciated in the later SMC years when one's surest way of travelling between Accra and Kumasi and beyond, was in an articulated truck.

AFRC had exacerbated the problem in the three short months it was in power. It took Limann to think and come up with the Tata buses. It was a strategy that dramatically eased the strain of transportation difficulties the public was enduring.

In later days, unrelated to transportation, congress lured kayayei in deceptive election tactics, into twerk dancing the song 'Alhaji' to the polling booth to cast retrograding back stepping votes in 2008. Those votes, together with the stolen ones, terminated the Kufuor progressive agenda, which included modernizing the national transportation system.

Apparently, there are many young men who have come to see riding the machine, as rider operator or mate, as comfortable lucrative job. Owning one has also become lucrative venture for those investing in their import, wholesale and retail. There's the repair and maintenance aspect too. That is multiplying jobs.

Concern is what went into the thinking that led to the creation of all those jobs. Someone should have thought sustaining them in the long term. It's the characteristic of onaapo and his hench people seeing an opportunity to make money off people rather than solving transportation problem. Nothing ever stops them from that.

Machines are made for human comfort. Humans are not made for machines to use. Any introduction of machine for human use must, therefore, be accompanied by rules and regulations that guide their safe use. Given the kind of road system we have, one wonders what informed the congress governments that the aboboyaa family of vehicles would fit the purpose of improved safe transportation system.

The ignoramuses crying there's no law prohibiting the plying of aboboyaa anywhere and everywhere today, should show us the law they passed to guarantee the public safety in their operation. I haven't seen any public education that has been about their safe operation. In their action before thought governance style, anytime someone thinks a money-making way, they just procure and dump whatever the machine into the system regardless of whatever danger they might pose and actual harm they might inflict.

Right now, it's like playing the issue for votes in their usual self first, forget about nation. Unlike the akwadaa minicabs which did not spread in large numbers beyond Nkawkaw and Techiman, aboboyaa is everywhere where votes will be cast. If they can tap into that, they figure out they could be putting up a fight against the eight break.

My pragea ride, out of absolute necessity and desperation experience I once narrated in this column. It wasn't the most comfortable. Worse, I witnessed a woman thrown out of pragea onto the sidewalk. The operator was negotiating a left turn into the major road and was knocked by an approaching vehicle. It all happened at Madina Social Welfare.

They have miserably failed to protect the youth who would be engaged in the aboboyaa business system they were establishing in the motherland. In their live for today modus operandi in governance, it had not occurred to them to forward plan to sustain those jobs. So, they are now desperately looking for someone to blame. They see their opponents' aggressive determination to break the eight menacingly staring them in the face. Protecting an aboboyaa industry they see as one way to fight the break the eight.

It's going to be an uphill task for them. For one, Abɔdwesɛ, one of their own, has thrown his weight behind the Man Mountain's progressive aboboyaa move. Probably, Abɔdwesɛ is still reminded of his struggles with truck pushers along the Kaneshie Highway from First Light to the Mallam Interchange.