Funny Face and Shatta Wale got it all wrong 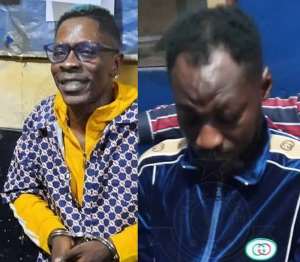 There is no doubt that Funny Face and Shatta Wale are good at their crafts. To constantly entertain their audiences over a decade is no mean achievement because some entertainers clutch at straws just to keep their careers afloat or drown due to the enormous pressure that comes with being an entertainer.

However, these two entertainers almost always court trouble and public disaffection for themselves. I am tempted to believe that, they take delight in having all eyeballs on them by embroiling themselves in one controversy or the other.

Just last week, Funny Face went on rampage in a video spewing invectives at some respectable persons in society in the persons of Bola Ray, Fadda Dickson and his own friend, Sheyi Adebayor without provocation. He further went ahead to threaten to kill his children's mother and also commit suicide.

I thought the psychiatric evaluation he received somewhere this year would have done the trick, but it seems he is suffering a relapse or he is doing all what he is doing on purpose.

I am happy the police swiftly arrested him.

Per his utterances, he is a threat to his children's mother and to himself. He should not be allowed anywhere near them and if possible, sent back to the psychiatric hospital once more for thorough scrutiny. Also, the law should not treat him with kid gloves.

This is not the time to abandon him. He needs all the attention and love in order to bounce back. He also needs to put his act together by exhibiting good behaviour that befits his status because most of his following are kids who take inspiration from him.

Furthermore, Funny Face needs to render an unqualified apology to his children and their mother for his behaviour. It was uncalled for and must be condemned in no uncertain terms.

As for Shatta Wale, the least said about him, the better. Publicity stunt is allowed in showbiz, but he exceeded his limits by creating fear and panic with his tactless and cheap stunt. Why would one fake that he has been shot and battling for his life, only to find out that he was hale and hearty?

Shatta Wale has been given too much room to misbehave and this time around, he decided to take it a notch higher by sending the police on a wild goose chase.

Once again, thumbs up to the police for arresting such a public nuisance. He should face the full rigors of the law to serve as a deterrent to others harbouring same intentions.

His infantile vituperations anytime he disagrees with someone should be curtailed and never countenanced. It is not healthy for consumption. There are kids in the society who cherish and wish to be like him, so the earlier he puts a stop to such bad attitude, the better.

We perfectly understand that as entertainers, they also have some difficult hurdles in their lives that they deal with, but that does not give them the boldness to misconduct themselves and put people's lives at risk. They need to be a shinning example for others to emulate.

I hope Funny Face and Shatta Wale have gleaned some lessons from what has happened and going forward, they would not repeat it. It is my prayer that they will come out better and not broken.