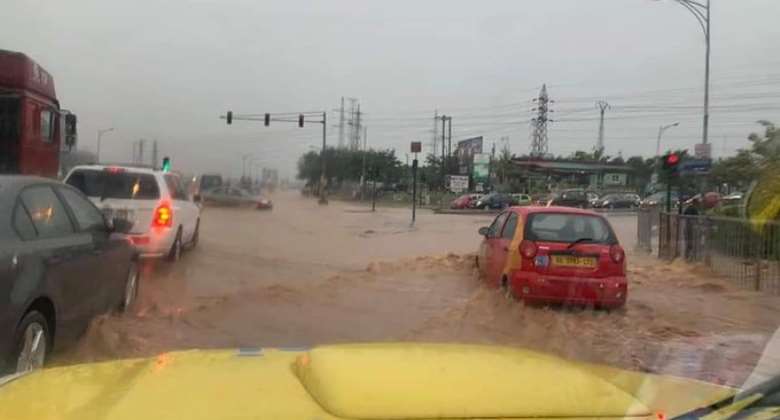 A heavy downpour on Monday resulted in flooding in parts of the Eastern Regional capital, Koforidua.

Portions of the Koforidua central market, central police station and other areas in the central business district were submerged in floodwaters after the about two and half hour rains.

Residents are however outraged that the Nsukwao basin drainage project has not solved the perennial flooding in the town.

Other areas including Srodae and the Prince Boateng roundabout also got flooded.

A drive through the town after the rains, showed cars still submerged, with a number of access routes cut off.

Koforidua has in recent times experience heavy rains which have been a blessing to farmers but a source of worry to some inhabitants.

Electrical gadget shops, spare parts and coffin makers around Nsukwao all had their fair share of destruction.

Residents in time past had faced flooding challenges, and the completion of the Nsukwao basin drainage project was expected to come as a relief to them.

The drainage project was launched under the Ghana Secondary cities support program.

It was to improve urban management and basic urban services in 25 participating municipal assemblies across the country.

In August 2017 when President Nana Akufo-Addo cut sod for the drainage project he noted its completion would minimize flooding in the identified communities.

But the residents feel otherwise.

A bridge that connects Adweso Low-Cost Housing to the Adweso Ssnit flat has been completely washed away by the rains. This has affected the movement of students and motorists in the area.

The New Juaben South Municipal Chief Executive, Isaac Apau Gyasi who believes the project even before completion has reduced flooding in Koforidua is still worried and wants residents to be very cautious.

He however said structural adjustments would be suggested to engineers of the project to ensure residents downstream are relieved.

Meteorologists have already cautioned residents to brace themselves for more rains in the coming days.

One Teacher One Laptop: Teachers Alliance to demonstrate on ...
12 minutes ago