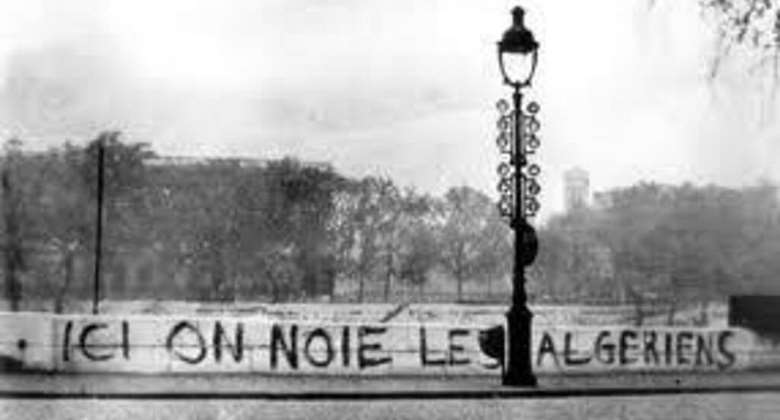 On 17 October, 1961, French police cracked down on a peaceful demonstration in Paris by pro-independence Algerians. Scores of people were killed. Ahead of the 60th anniversary of this atrocity, which has largely gone ignored, wounds are still raw – and there are calls for France to officially take responsibility.

The Evian Accords giving Algeria independence from France were only six months away, but in October 1961 tensions between the pro-independence FLN movement and the chief of Paris police, Maurice Papon, were at an all-time high.

Papon had imposed a curfew on Algerians in the capital after FLN fighters had killed some 30 police officers weeks earlier.

On the evening of 17 October, some 30,000 Algerian men, women and children heeded a call by the FLN and took to the streets in protest.

"It was meant to be a peaceful protest. The organisers told us to have nothing on us, not even a safety pin," recounts Djamila Amrane, now 87. "We just wanted to fight injustice."

Algerians in Paris had become accustomed to regular police round-ups and harassment. Amrane was active in the FLN movement and knew Papon's forces would be looking for a fight.

"Some of the women I invited to come along had dressed up for the occasion, but I knew we were taking a risk. I wanted to be able to run," she told French media.

When the police charged, she clung onto her two-month-old infant and tried to find a way out. She said she owes her life to "a French lady who opened her gate", pulling her to safety.

Khaled Benessa was just 13 when he and his family left the slums of Nanterre, west of Paris, to reach the protest in the city centre. But they were stopped from crossing the Seine river in what was clearly an operation prepared well in advance.

"The mobile guard was blocking the way; they had machine guns positioned on tripods," he told RFI. "I saw people in front being shot and falling to the ground."

Khaled tripped over in the dark. "I thought I'd stumbled on the pavement but I'd tripped over dead bodies. And then other corpses fell on top of me."

He thought he was going to suffocate until someone pulled him from underneath the corpses by his feet. It was his uncle.

Meanwhile in town, demonstrators were being grabbed by police as soon as they got off the metro.

"When I reached Pont de Neuilly metro, I was stunned," remembers Catherine Lévy, a 19-year-old student at the time. "Algerians were on the embankment covered in blood and the police refused to let us speak to them."

Some 12,000 people were arrested and bussed to internment camps where they were either beaten or expelled to Algeria.

The next day there was talk that some people "hadn't come home," Khaled recalls.

"We lived in slums on the banks of the Seine and we started seeing bodies floating down the river. We realised the police had just thrown them in there."

Most French people did not witness the atrocities, and were unaware of the scale of the killings. But gradually word got around and a now-famous piece of graffiti "Here we drown Algerians" was scrawled across one of the Seine's bridges not far from the Louvre.

It's impossible to know exactly how many people were killed by the police that night. The official count at the time was just three, including two Algerians.

"The French authorities and the police announced two deaths," historian Gilles Manceron told RFI. "In his 1980 memoires, Papon said the FLN had gone into the streets and fired on the police. That's completely false."

For years no one spoke much about what happened. The authorities censured the truth while many in France's Algerian community preferred to bury their painful memories.

"Things sort of went back to normal and I returned to school," says Khaled. "People didn't talk about it much; I think they wanted to protect their children."

Awakened by the huge Marche des Beurs (March for Equality and Against Racism) in 1983, those children, now adults, began asking questions.

"We had to unearth lost archives and find witnesses – Algerians but also police officers who were willing to speak on the record," said Lallaoui, who made the 1991 documentary Silence du fleuve (Silence of the River) about the 17 October massacre.

That same year, historian Jean-Luc Einaudi published groundbreaking research contesting the official death count, estimating as many as 200 had been slaughtered by the police.

"People ask why this event was forgotten, but first you have to know it happened," Manceron says.

In fact it was deliberately erased by those in power at the time.

"It didn't fit in with the national myth that the republic has always been loyal to principles on the mainland," another historian, Olivier Le Cour Grandmaison, told RFI.

"France is gradually beginning to acknowledge grim truth of what unfolded on 17 October, 1961.

This began when the former Socialist Paris mayor Bertrand Delanoe put up a commemorative plaque on the Saint-Michel bridge, close to the police headquarters, in 2011.

A second milestone took place in 2012, when then-president François Hollande became the first French leader to recognise the killings.

"Algerians protesting for their right to independence were killed during a bloody repression," he said.

He stopped short of using the term "massacre" but said the country "clearly recognised these facts", as he paid tribute to the memories of the victims.

​​​​​Le Cour Grandmaison says this isn't enough.
"It has to be considered a massacre. We know there were summary executions in the courtyard of the police prefecture, a few dozen metres from Papon's office.

"Calling it a bloody repression doesn't change was happened."

Le Cour Grandmaison is part of a collective pushing for official state recognition of the massacre, but it's slow work.

"Things have advanced very little. Our appeal is more or less the same word for word as in 2001, which proves the exraordinary resistance we face."

Samia Messaoudi and Mehdi Lallaoui want "justice and reparation" as well as official recognition and, like many, hope Macron will go further than his predecessors.

Shortly before taking office he described colonisation as a "crime against humanity". He also recently apologised to Harkis for the way France had abandoned them at the end of the Algerian war.

Djamilia Amrane will be attending a day of remembrance for victims of the 17 October massacre on Sunday.

She wants Macron to recognise a "crime of the state".