Fayemi, A Governor Stretched By New Idea Or Sensation? 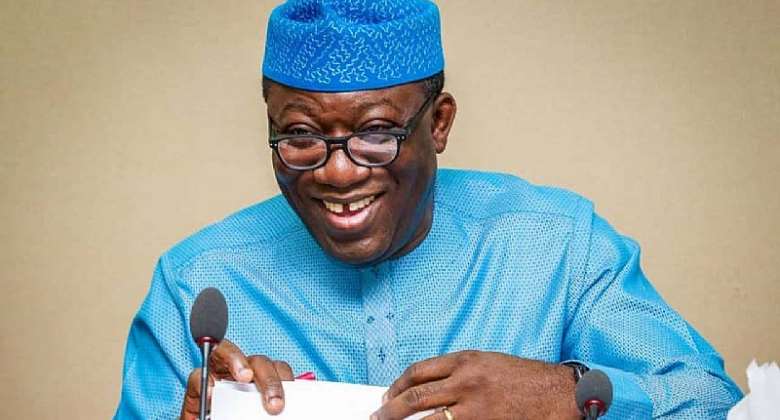 While the charge up to the elections in Ekiti state by 2022 is gathering momentum with politicians and political analysts spilling over with permutations, Governor Kayode Fayemi of the state said that the future will determine his next political movement.

Without a doubt, the mind of Fayemi of Ekiti is stretched by a new idea or sensation on how to develop the state every now and then (beyond his stay in office).

His government has shown a rare commitment to a nontoxic and abounding Ekiti, by working harder to achieve impactful governance to all in the state.

What has endeared many to Fayemi is that he is not given to irritation in handing over uncompleted projects to who will succeed his government; hence he is committed to completing all the ongoing projects.

As a people-oriented government, his government has restored hope in the residents of the state. For instance, in August, 2021, Kayode restored payment of consequential salary adjustments of Minimum Wage to Ekiti workers, which was earlier put on hold due to the state was building up revenue for the workers’ plight.

The testament was specified by the Commissioner for Information, Akin Omole, at the Economics Review Meeting held in August, in Ado-Ekiti.

When critics had thought Kayode was done, he also stated that the payment of percent Subvention to Ekiti State University Teaching Hospital was approved by the committee.

From 50- 60 percent, the subvention to Ekiti State University, Ado-Ekiti (EKSU) and Bamidele Olumilua University of Education, Science and Technology, Ikere-Ekiti (BOUESTI) was increased; and September 2021 was the month for its approval.

With how he is going about governance in Ekiti, Kayode has proved that he is a solution governor personified who will not stop at anything to avoid crises and challenges that are not tailored towards giving the people good governance.

If Kayode were to be some persons, he won’t have been bothering to give Ekiti the best in all facets of governance having suffered three and half years in 2007 in the hands of political demagogues when he contested election that saw him through the courts till October 15, 2010 when the Appeal Court (in Ilorin, Kwara State) pronounced him as the authentic elected Governor of Ekiti State.

Upon all that were the hand of detractors who called themselves activists and opposition that pushed him around the court in his first tenure, Kayode didn’t relent to give Ekiti state the true meaning of democracy – by making sure that the state did not only know the meaning of transformation, but also experienced it.

Economy has been tested to be good in the state and driving industries heralding the nooks and crannies of Ekiti state. Micro-finance as a bastion to assuage poverty was introduced to help micro, medium and small-scale business enterprises to grow in the area of attaining soft loans. This was aside a certain amount of money he created and gave out monthly for the upkeep of the aged and senior citizens in Ekiti State

It is no longer a doubt that Kayode loves investing in human capital, (people-oriented projects) and the workforce in that state have always gained skills through world class trainings and courses. Kayode has been consistent before and after he came for a second term on July 14, 2018.

The lacuna his absence created within the period preceding his reemergence as Governor of Ekiti state was better imagined than it’s experienced by the residents of the state, who yearned for a dependable man like Kayode.

As a man of purpose, Kayode did not relax within the period he was in political oblivion as the then ex-governor of Ekiti, he heightened his political sagacity for the task ahead of him and the people didn’t disappoint him as they re-elected him governor, breaking the political bone of an incumbent whose interest was dashed.

It was meant to understand that why his people love him so much is because he didn't betray his scholarly position of international linage. His second term as governor of Ekiti State has indeed become a blessing to the state that was once governed like it was a garrison station within the period following his reemergence as governor.

People see Kayode beyond Ekiti state as an exemplary statesman, an extraordinary leader, and a knowledgeable scholar of international history. They also see him as a veteran development connoisseur, an accomplished politician and conscientious statesman who walks his talk than some other politicians who would prefer to play politics in everything.

But he was confident to return as governor when he told his people and followers of the Ekiti State branch of All Progressives Congress that he was confident to return to the job of governor. He was optimistic to win given his belief as at the time that there were unfinished businesses of giving his people good governance which he wanted to complete.

His message has been consistent – he gives whatever that appeals to his fantasy thoughts and planning. It would be imperative to state that Ekiti people would miss Governor Fayemi Kayode when he leaves office as governor next year.

They will miss his infrastructural development prowess, security prudence, financial accountability, workforce loving-heart and many more.