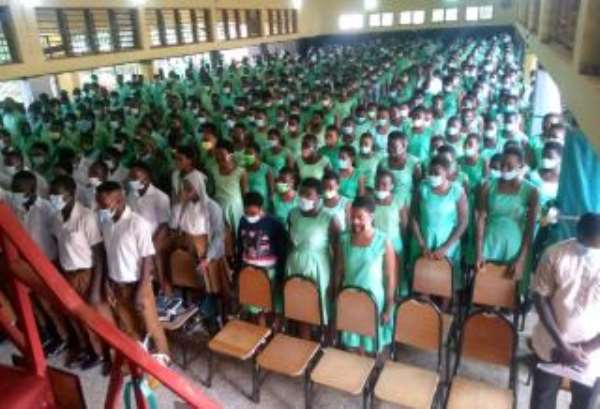 Damongo Senior High School, located in Damongo in the West Gonja Municipal of the Savannah Region, has launched its 50th anniversary with an unveiling of the celebration cloth and other souvenirs.

The launch of the anniversary was held at the school's Assembly hall on Saturday, September 25th, 2021.

The occasion was held with strict compliance to the Covid-19 protocols especially the wearing of nose masks and hand washing.

Chairman of the event, Bridge-Wura Harrison in his remarks, called on parents, old students and all stakeholders to contribute towards the upkeep of the school.

The Headmaster in a speech read on his behalf by the assistant headmaster in charge of academic, Mr. Kipo Dramani, among other things, enumerated some challenges of the school including the perennial water issue and uncompleted fence wall of the school which according to him, miscreants often take advantage to cause trouble including theft.

Mr. Petro Akorlie who represented the Savannah Regional Minister as the special guest of honour in his address, implored the students to take advantage of the free senior high school policy to climb higher in the educational ladder adding that they are the future leaders of the country.

Chairman of the steering committee, Mr. Attah George, in an interview with the media, revealed that the projects envisioned to be executed to commemorate the anniversary celebration slated for November 27th, would be the drilling of two mechanized boreholes at a cost of Gh¢ 20,000 to solve the school's water challenge.

According to Mr. Attah George, the projects envisioned by them when completed, will be of tremendous benefit to the students and therefore appealed to stakeholders especially all old students to actively participate in the anniversary activities and contribute their quota towards such projects.

The school was established on November 22, 1971 with the first enrollment of 66 students ( all boys ) but later had two girls transferred to the school from St. Francis of Assisi, Jirapa.

The theme for the 50th anniversary as unveiled during the launch is "50 years of Academic Excellence: Celebrating the Past and Igniting our Future in a Challenging Environment."