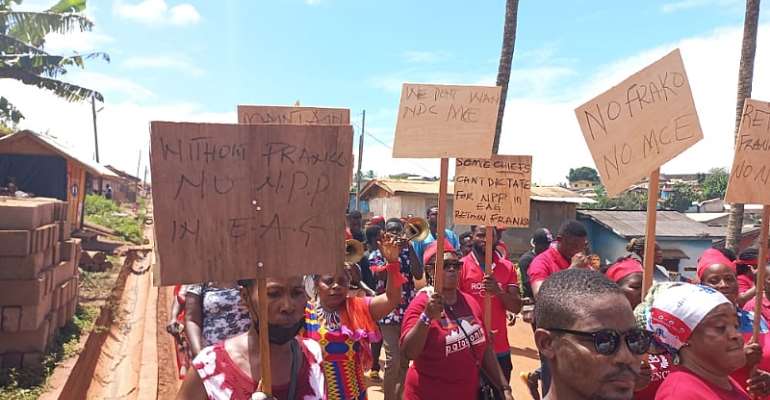 With a few minutes for the Local Government Ministry to release the names of the Metropolitan, Municipal and District Chief Executives, supporters of the MCE for Nzema East Municipality, Frank Okpenyen, who have picked up information about him not being retained are demonstrating in Axim.

The dozens of supporters of the MCE, popularly called Franko, demanded his retention for a second term.

They carried placards with messages directed at the President which include inscriptions such as “No Franko, No MCE”, “We don't want NDC MCE”, “Some Chiefs can't dictate for NPP, retain Franko” and “Without Franko, No NPP”.

When Citi News contacted Frank Okpenyen, the Nzema East MCE, about the demonstration, he said he had no knowledge about the exercise.

“I am not privy to that. I am in Takoradi now. I came to Takoradi last Friday for my semester exams. I'm not able to comment as officially there is no announcement yet. I will have to do some checks after the exams”, he said.

Frank Okpenyen alias, Franko, though seen by some as hardworking, some NPP members want him kicked out as he has fallen out with former MP for Evaloe Adjomoro- Gwira, Catherine Afeku.

Until his appointment, Frank was a special assistant to Catherine Afeku, who was also a former Tourism Minister.