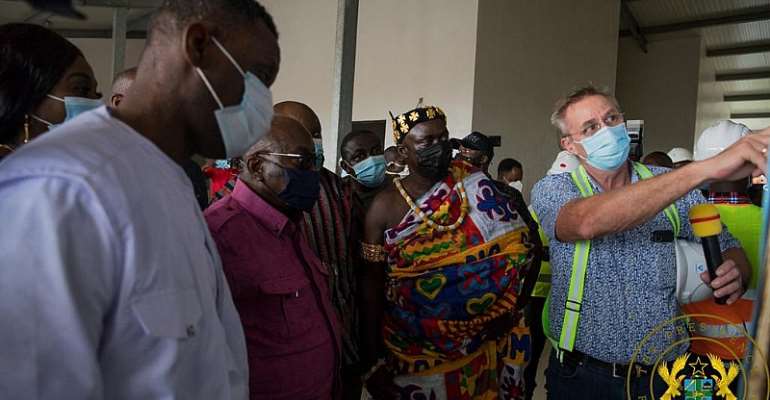 The President of the Republic, Nana Addo Dankwa Akufo-Addo, on Saturday, 4th September 2021, as part of his 2-day tour of the Western Region, cut the sod for the commencement of work on the reconstruction of the 67-kilometre Agona Nkwanta – Tarkwa Road.

Being funded with a 95-million-euro facility from Deutsche Bank AG, Frankfurt, Germany, the project is expected to be completed by 31st August 2024, i.e. 36 months.

The Road project, once completed will link Tarkwa, one of the major economic centres of Ghana, to the port city of Takoradi and to the national route, N1, which links Ghana to Cote D’Ivoire.

It also connects the mineral and agricultural rich lands in the Western, Ashanti, Western North and Central Regions to Takoradi, as it serves as the shortest and most efficient route for the transportation of gold, manganese, bauxite, timber as well as agricultural goods like cocoa, rubber and timber, to Takoradi.

Speaking at the sod-cutting ceremony, President Akufo-Addo noted that the reconstruction of the road, being undertaken by Messrs Rango-Gabriel Couto, a wholly owned Ghanaian company, forms part of a comprehensive plan of action being taken by Government to improve the road network in the Western Region, and, indeed, in all parts of the country.

Specific to the Western Region, Government has embarked on the construction of the PTC Interchange in Takoradi, which is the first interchange in the western part of Ghana, and is estimated to be completed by June 2023.

At Dixcove, President Akufo-Addo inspected ongoing work on the Dixcove Landing Beach, a project whose construction commenced a year ago.

With the break water and marine work some 90% complete, the project co-ordinator indicated to the President that reclamation and demolition works are also completed, with onshore facilities will commence in early October 2021. It is expected that, these works will be completed in the next 6 months.

Once completed, the facility will bring a lot of relief to the fishermen and the fisherfolk, who constitute a greater number of the population.

Other ancillary facilities that will complement the fish landing site include ice making plants, water supply and electricity supply, washing facilities and toilets for the fisher folk, net mending sheds, as well as nursery and day care facilities for the women.

It will be recalled that during his tour of the Western Region in 2019, the President symbolically cut the sod for the construction of eleven (11) modern landing sites along the coast.

The other nine (9) beneficiary towns are Moree, Mumford, Winneba, Senya Beraku, Gomoa Fetteh and Elmina in the Central Region, Teshie and James Town in the Greater Accra Region, and Keta in the Volta Region.

At Bogoso, the President inspected ongoing work on the construction of the 46-bed Bogoso Polyclinic, which is being constructed by VAMED Nederland BV.

The turnkey project started on 4th February 2020, is currently 75% complete, and is expected to be completed in December 2021.

"Greater Accra NPP is poised to recapture all lost seats in ...
49 minutes ago