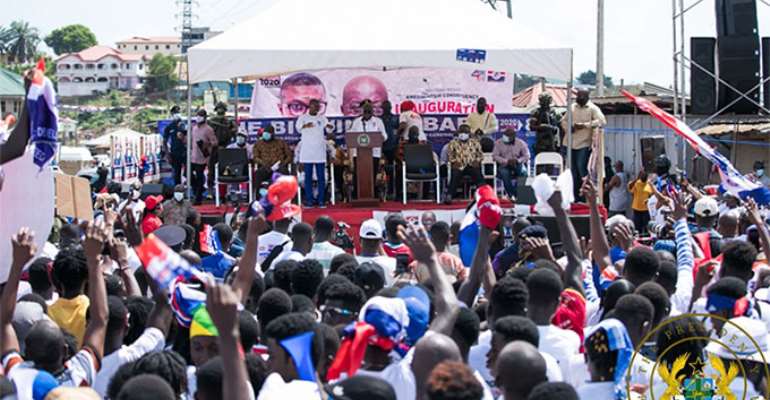 …but for the absolute majority it had in the Seventh Parliament and the huge vote margin its presidential candidate had in 2016, the NPP would have been in opposition by now.

Over the years, at least since the beginning of the Fourth Republic, various governments often attribute their loss of political power to anger of their party supporters. From 2000 to date, all political parties have gone with the mantra that party supporters got angry and did not go out in their numbers on election date, especially in their strongholds, to vote.

This assumption has largely been influenced by voting pattern in some parts of the country and sometimes based on people's instinct. For instance, a dip in the voter turn-out in the Ashanti region will likely affect the chances of the NPP in an election and the immediate, often, attributable cause to this dip, as stated above, is 'anger' of supporters.

CDD survey
However, it appears the most empirical evidence to support this widely held perception is the post-2020 election survey report published by the Centre for Democratic Development (CDD-Ghana).

The survey sampled 2,400 randomly selected adult citizens from all 16 regions of Ghana. Data was collected from 23 May to 3 June, 2021. It used face-to-face interviews in the language of the respondent's choice, and the regional sample sizes were picked based on the 2019 adult population projections of the various regions.

According to the report, a cumulative 58 per cent of the respondents attributed “the reduction in President Nana Akufo-Addo's vote margin to his policy decisions, his MPs and appointee’s performance.”

It further found, on the party's performance in the parliamentary elections, a staggering 33 per cent who attributed the huge loss to the MPs' non-performance, with 24 per cent saying the NPP MPs' campaigns were bad.

Saved by the bell
The NPP was saved by the sheer number of votes and seats it garnered in both the presidential and parliamentary elections respectively in the 2016 general election. In less than four years, the NPP's presidential candidate, Nana Addo Dankwa Akufo-Addo, lost almost 50 per cent of the votes margin he won in 2016, dropping from an almost one million votes margin to just about 500,000 (lost almost 500,000). The NPP also lost 32 parliamentary seats, with as many as 31 of those seats going to their bitterest rivals, the NDC.

Clearly, but for the absolute majority it had in the Seventh Parliament and the huge vote margin its presidential candidate had in 2016, the NPP would have been in opposition by now. It is, therefore, not surprising that it lost the third gentleman slot (Speaker of Parliament) to the opposition NDC.

NDC not an alternative
Interestingly, the same Ghanaians who voted against the NPP say they did not do so because they saw or see the NDC as an alternative. Indeed, just an infinitesimal three per cent of the respondents attributed the NPP's loss to the opposition NDC's new policies and campaign strategies.

On the side of the MPs, just a paltry four per cent attributed the loss to economic issues. Indeed, a whooping 16 per cent believe the President's drop in vote margin was due to low voter turnout.

It is obvious from the findings that Ghanaians do not see the NDC as an alternative. Neither do they see the government as performing badly. This is evident in the high percentage of respondents who expressed high hopes in the ability of the Akufo-Addo government to better their lot in its second term in office.

As was found by the survey, majority of Ghanaians are optimistic that in the next four years, the government will perform “much better or better” in addressing public/social service delivery. On the average, 65 per cent of the respondents have high hopes in the government to perform much better or better or at least maintain its standard of performance in addressing educational needs; providing a reliable supply of electricity; maintaining roads and bridges; providing water and sanitation services and protecting the human rights and civil liberties of all citizens.

However, the survey has established that Ghanaians will have no qualms at all in voting for the NDC or decide not to vote if the NPP MPs and appointees continue to behave the way the are behaving now.

If the arrogance, disrespect, greed, selfishness, among others, continue to pester for the next four years, then the verdict could be obvious.

The sages say 'my enemy's enemy is my friend'. If the government's appointees will continue to behave like 'enemies' to the people, we all know what follows.

Even if Nana-Addo changes constitution and contest, Mahama w...
18 minutes ago