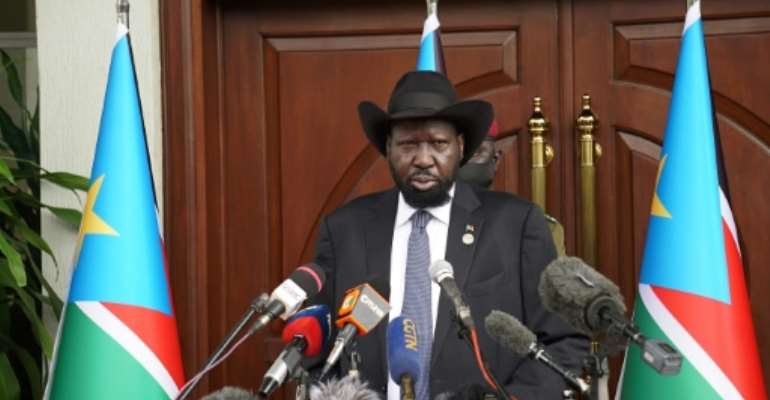 South Sudan President Salva Kiir is due to inaugurate parliament on the same day as the demonstrations. By Peter Louis GUME (AFP/File)

Security forces patrolled South Sudan's capital Juba on Monday and many shops were shut as the authorities warned of a tough crackdown against anyone planning to join a planned protest against the government.

The world's newest nation has suffered from chronic instability since independence in 2011, with deepening discontent prompting a coalition of civil society groups to urge the country's leadership to step down, saying they have "had enough".

The demonstration was set to take place the same day as President Salva Kiir is to inaugurate a newly created national parliament, a key condition of a 2018 peace deal that ended South Sudan's brutal civil war that killed nearly 400,000 people.

The government has taken a hard line against the People's Coalition for Civil Action (PCCA) and its calls for a peaceful public uprising, arresting at least eight activists and detaining three journalists this month in connection with the demonstrations, according to rights groups.

Although the protest organisers have urged the public to come out in force, the mood in Juba on Monday was decidedly subdued, with residents telling AFP they were nervous to leave home.

"We are hearing that there is no work today and besides we are fearing (what the day will bring)," food hawker Emelda Susu told AFP.

"I will go to the market when I see things are normal but for now one's life (comes) first, my friend. Yes I am fearing so I have to be careful," Jimmy Bandu, a small-scale trader, told AFP.

The authorities have branded the protest as "illegal" and warned of strict measures against anyone who defies the ban.

"The government is in full control and... so everybody should resume his or (her) normal duties and... not fear anything," Information Minister Michael Makuei told AFP.

He dismissed reports of an internet shutdown, after users reported problems with accessing two of the country's main networks, Zain and MTN, saying any issues were due to technical troubles.

The US embassy in Juba has asked its citizens to avoid the areas where protesters may assemble, urging them to "exercise caution".

The PCCA -- a broad-based coalition of activists, academics, lawyers, and former government officials -- has described the current regime as "a bankrupt political system that has become so dangerous and has subjected our people to immense suffering".

The 2018 truce and power-sharing deal between former foes President Salva Kiir and his deputy Riek Machar still largely holds but it is being sorely tested, as politicians bicker over power and promises for peace go unmet.