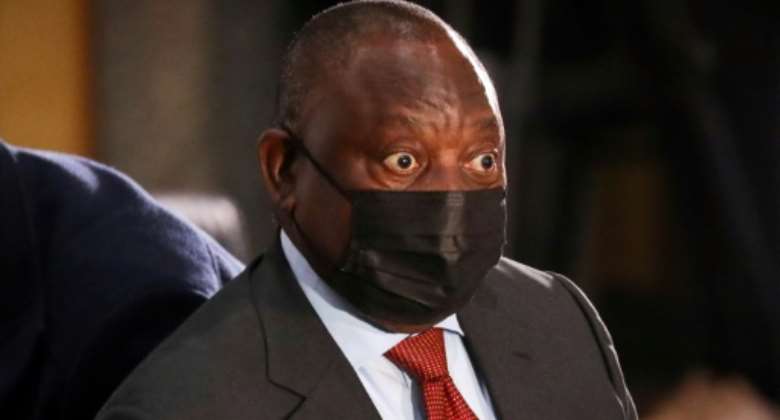 Ramaphosa arriving Thursday for his second day of testimony at the anti-graft inquiry. By Sumaya HISHAM (POOL/AFP)

Ramaphosa told a judicial panel probing the plundering of state assets under Zuma that "we have been through a period of state capture that really debilitated a number of state institutions."

The State Security Agency (SSA) "was one of the agencies that was compromised," he said.

Ramaphosa's testimony comes on the heels of riots and looting last month sparked by the jailing of Zuma -- an episode that triggered accusations of sabotage and failures by South Africa's intelligence chiefs.

Ramaphosa was deputy president for four years under Zuma's tenure before succeeding him in 2018.

On his first day of testifying on Wednesday, he said that he was in the dark about much of the corrupt dealings.

But he said he chose not to speak out about the graft as he could have been fired, and it was more effective to fight from within.

Zuma last month began serving a 15-month jail term for bucking a court order to testify to the anti-corruption inquiry.

Loooting: Shopping malls were attacked after Zuma was jailed for contempt of court. By GUILLEM SARTORIO (AFP)

Protests by diehard Zuma supporters snowballed into violent unrest and the ransacking of shopping malls and warehouses in two provinces, dealing a crippling blow to South Africa's economic and reputation for investors.

At the time of the unrest, Ramaphosa called the riots an attempted insurrection.

This month, he moved the agency into the office of the presidency in order to keep what he described as a closer eye on the institution and root out bad actors.

"We just went into an abyss and we are clawing our way back to the top, and in doing so we are determined to succeed and we will succeed," Ramaphosa said on Thursday.

The inquiry, which has held over 400 hearings, is set to conclude at the end of September.