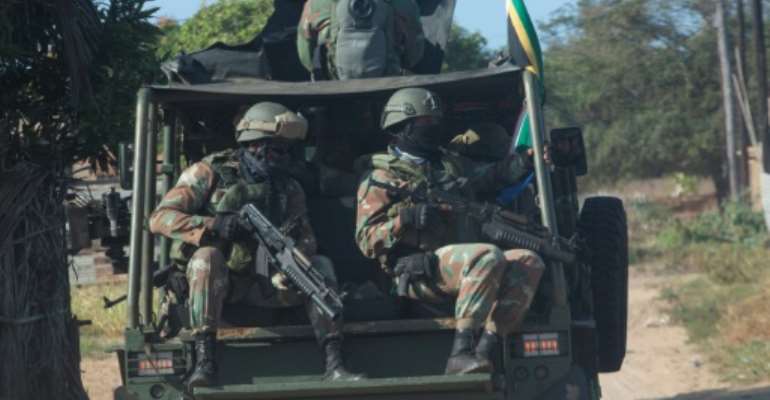 A convoy of South Africa National Defence Forces patrols the Maringanha district in Pemba on Thursday. By Alfredo Zuniga (AFP)

Rwandan forces in Mozambique, deployed less than a month ago to help battle jihadists, said Thursday they have scored successes in driving out the militants wreaking havoc in the country's gas-rich north.

The forces last week helped the Mozambique army regain control of Awasse -- a small but strategic settlement near the key town of Mocimboa da Praia seized by militants in August last year.

"We have registered successes on two fronts and are closing in Mocimboa da Praia," he added, referring to the port town that has been occupied by the militants since August 12, 2020.

The town, from where the first Islamist attacks were staged in October 2017, has since last year become the de-facto headquarters of the IS-linked extremists.

Mozambican military forces have been struggling to regain control over the province, which is home to one of Africa's biggest liquefied natural gas projects.

Rwanda said the insurgents had fled Awasse to other small towns near Mocimboa da Praia "but we are closing in on" them.

Map of Mozambique locating the province of Cabo Delgado and the city of Palma.. By Kun TIAN (AFP)

Botswana became the first SADC country to send in boots on July 26, deploying 296 soldiers. President Mokgweetsi Masisi, who chairs SADC's defence and security arm, has been outspoken on the urgent need for regional stability.

Angola will deploy, from August 6, 20 specialised military airforce personnel while Namibia will contribute N$5.8 million (about $400,000) towards the anti-insurgency offensive.

The European Union on July 12 formally established a military mission for Mozambique to help train its armed forces battling the jihadists.

Former colonial ruler Portugal is already providing training for Mozambican troops, with Lisbon's military instructors expected to make up half of the new EU mission.